The Horse-Stealers and Other Stories 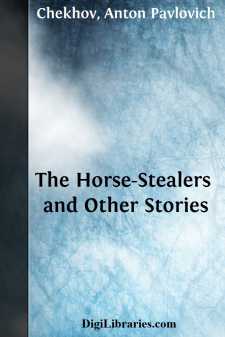 A HOSPITAL assistant, called Yergunov, an empty-headed fellow, known throughout the district as a great braggart and drunkard, was returning one evening in Christmas week from the hamlet of Ryepino, where he had been to make some purchases for the hospital. That he might get home in good time and not be late, the doctor had lent him his very best horse.

At first it had been a still day, but at eight o'clock a violent snow-storm came on, and when he was only about four miles from home Yergunov completely lost his way.

He did not know how to drive, he did not know the road, and he drove on at random, hoping that the horse would find the way of itself. Two hours passed; the horse was exhausted, he himself was chilled, and already began to fancy that he was not going home, but back towards Ryepino. But at last above the uproar of the storm he heard the far-away barking of a dog, and a murky red blur came into sight ahead of him: little by little, the outlines of a high gate could be discerned, then a long fence on which there were nails with their points uppermost, and beyond the fence there stood the slanting crane of a well. The wind drove away the mist of snow from before the eyes, and where there had been a red blur, there sprang up a small, squat little house with a steep thatched roof. Of the three little windows one, covered on the inside with something red, was lighted up.

What sort of place was it? Yergunov remembered that to the right of the road, three and a half or four miles from the hospital, there was Andrey Tchirikov's tavern. He remembered, too, that this Tchirikov, who had been lately killed by some sledge-drivers, had left a wife and a daughter called Lyubka, who had come to the hospital two years before as a patient. The inn had a bad reputation, and to visit it late in the evening, and especially with someone else's horse, was not free from risk. But there was no help for it. Yergunov fumbled in his knapsack for his revolver, and, coughing sternly, tapped at the window-frame with his whip.

With a hoarse bark a black dog rolled like a ball under the horse's feet, then another white one, then another black one—there must have been a dozen of them. Yergunov looked to see which was the biggest, swung his whip and lashed at it with all his might. A small, long-legged puppy turned its sharp muzzle upwards and set up a shrill, piercing howl.

Yergunov stood for a long while at the window, tapping. But at last the hoar-frost on the trees near the house glowed red, and a muffled female figure appeared with a lantern in her hands.

"Let me in to get warm, granny," said Yergunov. "I was driving to the hospital, and I have lost my way. It's such weather, God preserve us. Don't be afraid; we are your own people, granny."

"All my own people are at home, and we didn't invite strangers," said the figure grimly. "And what are you knocking for? The gate is not locked."

Yergunov drove into the yard and stopped at the steps....