The Home Life of Poe 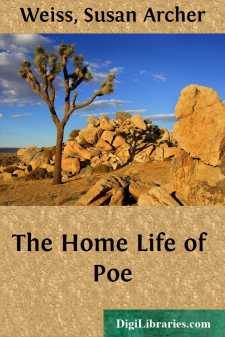 It may be regarded as a somewhat curious coincidence that the first glimpse afforded us of Edgar Poe is on the authority of my own mother.

This is the story, as she told it to me:

"In the summer of 1811 there was a fine company of players in Norfolk, and we children were as a special treat taken to see them. I remember the names of Mr. Placide, Mr. Green, Mr. Young and Mr. Poe, with their wives. I can recall Mrs. Young as a large, fair woman with golden hair; but my most distinct recollection is of Mrs. Poe. She was rather small, with a round, rosy, laughing face, short dark curls and beautiful large blue eyes. Her manner was gay and saucy, and the audience was continually applauding her. She appeared to me a young girl, but was past thirty, and had been twice married.

"At this time," continued my mother, "we were living on Main street, and my uncle, Dr. Robert Butt, of the House of Burgesses, lived close by, on Burmuda street. The large, bright garret-room of his house was used by our little cousins as a play-room, and was separated from that of the adjoining house by only a wooden partition. One day, when we were playing here, we heard voices on the other side of the partition, and, peeping through a small knothole, saw two pretty children, with whom we soon made acquaintance. Mr. and Mrs. Poe had taken lodgings in this garret with a little boy and girl and an old Welsh nurse. Sometimes this woman would say to us, 'Hush, hush, dumplings, don't make a noise,' and we knew that some one was sick in that room. Most of the time she had the children out of doors, and in the evenings we would play with them on the sidewalk. The boy was a merry, romping little fellow, but hard to manage. One day, when he would persist in playing in the middle of the street, a runaway horse came dashing around a corner, and I remember how the nurse rushed toward him, screaming: 'Ho! Hedgar! Hedgar!' snatching him away at the risk of her own life.

"This nurse was a very nice old woman, plump, rosy and good-natured. She wore a huge white cap with flaring frills, and pronounced her words in a way that amused us. She was devoted to the children, who were spoiled and wilful. The little girl was running all about, and the boy appeared about three years old."

Of this old lady it may be here said that she was really the mother of Mrs. Poe, whom she called "Betty." As an actress of the name of Arnold, she had played in various companies in both this country and Europe, taking parts in which comic songs were sung. Her pretty daughter, Elizabeth, she had brought up to her own profession, and had married her early to an actor named Hopkins, who died in October, 1805. Two months after his death his widow married David Poe, who was at that time a member of their company; and mean while her mother, Mrs. Arnold, had bestowed her own hand upon a musician of the romantic name of Tubbs, who soon left her a widow. Thenceforth she devoted herself to her daughter's family, remaining with the company and occasionally appearing in some unimportant part....