The History of the Telephone 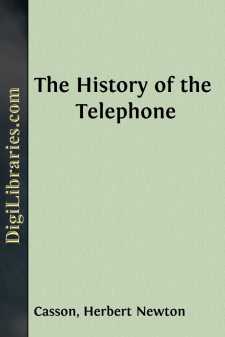 CHAPTER I. THE BIRTH OF THE TELEPHONE

In that somewhat distant year 1875, when the telegraph and the Atlantic cable were the most wonderful things in the world, a tall young professor of elocution was desperately busy in a noisy machine-shop that stood in one of the narrow streets of Boston, not far from Scollay Square. It was a very hot afternoon in June, but the young professor had forgotten the heat and the grime of the workshop. He was wholly absorbed in the making of a nondescript machine, a sort of crude harmonica with a clock-spring reed, a magnet, and a wire. It was a most absurd toy in appearance. It was unlike any other thing that had ever been made in any country. The young professor had been toiling over it for three years and it had constantly baffled him, until, on this hot afternoon in June, 1875, he heard an almost inaudible sound—a faint TWANG—come from the machine itself.

For an instant he was stunned. He had been expecting just such a sound for several months, but it came so suddenly as to give him the sensation of surprise. His eyes blazed with delight, and he sprang in a passion of eagerness to an adjoining room in which stood a young mechanic who was assisting him.

"Snap that reed again, Watson," cried the apparently irrational young professor. There was one of the odd-looking machines in each room, so it appears, and the two were connected by an electric wire. Watson had snapped the reed on one of the machines and the professor had heard from the other machine exactly the same sound. It was no more than the gentle TWANG of a clock-spring; but it was the first time in the history of the world that a complete sound had been carried along a wire, reproduced perfectly at the other end, and heard by an expert in acoustics.

That twang of the clock-spring was the first tiny cry of the newborn telephone, uttered in the clanging din of a machine-shop and happily heard by a man whose ear had been trained to recognize the strange voice of the little newcomer. There, amidst flying belts and jarring wheels, the baby telephone was born, as feeble and helpless as any other baby, and "with no language but a cry."

The professor-inventor, who had thus rescued the tiny foundling of science, was a young Scottish American. His name, now known as widely as the telephone itself, was Alexander Graham Bell. He was a teacher of acoustics and a student of electricity, possibly the only man in his generation who was able to focus a knowledge of both subjects upon the problem of the telephone. To other men that exceedingly faint sound would have been as inaudible as silence itself; but to Bell it was a thunder-clap. It was a dream come true. It was an impossible thing which had in a flash become so easy that he could scarcely believe it. Here, without the use of a battery, with no more electric current than that made by a couple of magnets, all the waves of a sound had been carried along a wire and changed back to sound at the farther end. It was absurd. It was incredible. It was something which neither wire nor electricity had been known to do before....