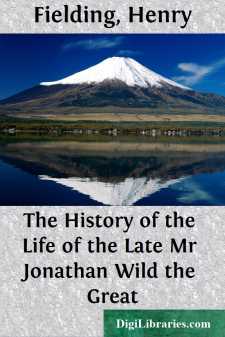 Jonathan Wild, born about 1682 and executed at Tyburn in 1725, was one of the most notorious criminals of his age. His resemblance to the hero in Fielding's satire of the same name is general rather than particular. The real Jonathan (whose legitimate business was that of a buckle-maker) like Fielding's, won his fame, not as a robber himself, but as an informer, and a receiver of stolen goods. His method was to restore these to the owners on receipt of a commission, which was generally pretty large, pretending that he had paid the whole of it to the thieves, whom for disinterested motives he had traced. He was a great organiser, and he controlled various bands of robbers whose lives he did not hesitate to sacrifice, when his own was in danger. Naturally he was so hated by many of his underlings that it is a wonder he was able to maintain his authority over them as many years as he did. His rascality had been notorious a long time before his crimes could actually be proved. He was executed at last according to the statute which made receivers of stolen goods equally guilty with the stealers.

Beyond this general resemblance, the adventures of the real Jonathan, so far as we know them, are not much like those of the fictitious. True, the real Jonathan's married life was unhappy, though his quarrel with his wife did not follow so hard upon his wedding as the quarrel of Fielding's hero and the chaste Laetitia. Not until a year from his marriage did the real Jonathan separate from his spouse, after which time he lived, like Fielding's, not always mindful of his vows of faithfulness. Like Fielding's, too, he was called upon to suppress rebellions in his gangs, and once he came very near being killed in a court of justice by one Blake, alias Blueskin. Apart from these misadventures, the experiences of Fielding's Wild seem to be purely imaginary. "My narrative is rather of such actions which he might have performed," the author himself says, [Footnote: Introduction to Miscellanies, 1st ed., p. xvii.] "or would, or should have performed, than what he really did. … The Life and Actions of the Late Jonathan Wild, got out with characteristic commercial energy by Defoe, soon after the criminal's execution, is very different from Fielding's satirical narrative, and probably a good deal nearer the truth."

Jonathan Wild was published as the third volume of the Miscellanies "by Henry Fielding, Esq." which came out in the spring of 1743. From the reference to Lady Booby's steward, Peter Pounce, in Book II., it seems to have been, as Mr. Austin Dobson has observed, and as the date of publication would imply, composed in part at least subsequently to Joseph Andrews, which appeared early in 1742. But the same critic goes on to say that whenever completed, Jonathan Wild was probably "planned and begun before Joseph Andrews was published, as it is in the highest degree improbable that Fielding, always carefully watching the public taste, would have followed up that fortunate adventure in a new direction by a work so entirely different from it as Jonathan Wild." [Footnote: Henry Fielding, 1900, p. 145.] Mr. Dobson's surmise is undoubtedly correct. The "strange, surprising adventures" of Mrs. Heartfree belong to a different school of fiction from that with which we commonly associate Fielding. They are such as we should expect one of Defoe's characters to go through, rather than a woman whose creator had been gratified only a year before at the favourable reception accorded to Fanny and Lady Booby and Mrs. Slipslop.

That Jonathan Wild is for the most part a magnificent example of sustained irony, one of the best in our literature, critics have generally agreed. The comparison steadfastly insisted upon between Jonathan Wild's greatness and the greatness which the world looks up to, but which without being called criminal is yet devoid of humanity, is admirable. Admirable, too, is the ironical humour, in which Fielding so excelled, and which in Jonathan Wild he seldom drops. It would take too long to mention all the particularly good ironical passages, but among them are the conversation between Wild and Count La Ruse, and the description of Miss Tishy Snap in the first book; the adventures of Wild in the boat at the end of the second book; and, in the last, the dialogue between the ordinary of Newgate and the hero, the death of Wild, and the chapter which sets forth his character and his maxims for attaining greatness....