The History of the First West India Regiment

by A. B. (Alfred Burdon) Ellis 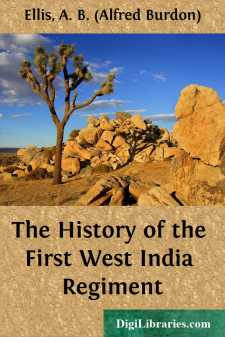 At the present day, when our Continental neighbours are outvying each other in the completeness of their military organisations and the size of their armies, while in the United Kingdom complaints are daily heard that the supply of recruits for the British Army is not equal to the demand, it may not be out of place to draw the attention of the public to a source from which the army may be most economically reinforced.

The principal difficulty experienced by military reformers in their endeavours to remodel the British Army on the Continental system, is that caused by the necessity of providing troops for the defence of our vast and scattered Colonial Empire. Without taking into consideration India, our European and North American possessions, a considerable portion of the army has to be employed in furnishing garrisons for the Cape Colony, Natal, Mauritius, St. Helena, the Bermudas, the West Indies, Burmah, the Straits Settlements, Hong Kong, etc.; which garrisons, though creating a constant drain on the Home Establishment, are notoriously inadequate for the defence of the various colonies in which they are placed; and the result is that, whenever a colonial war breaks out, fresh battalions have to be hurriedly sent out from the United Kingdom at immense expense, and the entire military machine is temporarily disarranged.

In size, and in diversity of subject races, the British Empire may be not inaptly compared with that of Rome in its palmiest days; and we have, in a measure, adopted a Roman scheme for the defence of a portion of our dominions. The Romans were accustomed, as each new territory was conquered, to raise levies of troops from the subject race, and then, most politicly, to send them to serve in distant parts of the Empire, where they could have no sympathies with the inhabitants. In India we, like the Romans, raise troops from the conquered peoples, but, unlike them, we retain those troops for service in their own country. The result of this attempt to modify the scheme was the Indian mutiny.

The plan of a local colonial army was, however, first tried in the West Indies. At the close of the last century, when the West India Islands, or the Plantations, as they were then called, were of as much importance to, and held the same position in, the British Empire as India does now, there was in existence a West India Army, consisting of twelve battalions of negro troops, raised exclusively for service in the West Indies.

As India was gradually conquered, and the West India trade declined (from the abolition of the slave trade and other causes), the West India Colonies, by a regular process, fell from their former pre-eminent position. Each step in the descent was marked by the disbandment of a West India regiment, until, at the present day, two only remain in existence; and it is a matter of common notoriety that those two are principally preserved to garrison Sierra Leone, the Gold Coast Colony, British Honduras, and British Guiana—colonies the climates of which, experience has shown, are fatal to European soldiers, who are necessarily in time of peace, from the nature of their duties, more exposed to climatic influence than are officers. Economy was, of course, the cause of this continued process of reduction, for, until recently, such gigantic military establishments as those of Germany, Russia, and France were unheard of; and Great Britain was satisfied, and felt secure, with a miniature army, a paper militia, and no reserve. All this is now changed, and the necessity of an increase in our defensive power is admitted.

These negro West India troops won the highest encomiums from every British commander under whom they served. Sir Ralph Abercromby in 1796, Sir John Moore in 1797, Lieutenant-General Trigge in 1801, Sir George Provost in 1805, Lieutenant-General Beckwith and Major-General Maitland in 1809 and 1810, all testified to the gallantry, steadiness, and discipline of the negro soldiers....