The History of Sumatra Containing An Account Of The Government, Laws, Customs And Manners Of The Native Inhabitants 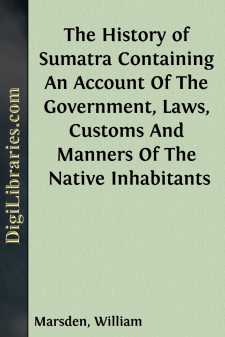 If antiquity holds up to us some models, in different arts and sciences, which have been found inimitable, the moderns, on the other hand, have carried their inventions and improvements, in a variety of instances, to an extent and a degree of perfection of which the former could entertain no ideas. Among those discoveries in which we have stepped so far beyond our masters there is none more striking, or more eminently useful, than the means which the ingenuity of some, and the experience of others, have taught mankind, of determining with certainty and precision the relative situation of the various countries of the earth. What was formerly the subject of mere conjecture, or at best of vague and arbitrary computation, is now the clear result of settled rule, founded upon principles demonstratively just. It only remains for the liberality of princes and states, and the persevering industry of navigators and travellers, to effect the application of these means to their proper end, by continuing to ascertain the unknown and uncertain positions of all the parts of the world, which the barriers of nature will allow the skill and industry of man to approach.

SITUATION OF THE ISLAND.

Sumatra, the subject of the present work, is an extensive island in the East Indies, the most western of those which may be termed the Malayan Archipelago, and constituting its boundary on that side.

The equator divides it obliquely, its general direction being north-west and south-east, into almost equal parts; the one extremity lying in five degrees thirty-three minutes north, and the other in five degrees fifty-six minutes south latitude. In respect to relative position its northern point stretches into the Bay of Bengal; its south-west coast is exposed to the great Indian Ocean; towards the south it is separated by the Straits of Sunda from the island of Java; on the east by the commencement of the Eastern and China Seas from Borneo and other islands; and on the north-east by the Straits of Malacca from the peninsula of Malayo, to which, according to a tradition noticed by the Portuguese historians, it is supposed to have been anciently united.

The only point of the island whose longitude has been settled by actual observation is Fort Marlborough, near Bencoolen, the principal English settlement, standing in three degrees forty-six minutes of south latitude. From eclipses of Jupiter's satellites observed in June 1769, preparatory to an observation of the transit of the planet Venus over the sun's disc, Mr. Robert Nairne calculated its longitude to be 101 degrees 42 minutes 45 seconds; which was afterwards corrected by the Astronomer Royal to 102 degrees east of Greenwich. The situation of Achin Head is pretty accurately fixed by computation at 95 degrees 34 minutes; and longitudes of places in the Straits of Sunda are well ascertained by the short runs from Batavia, which city has the advantage of an observatory....