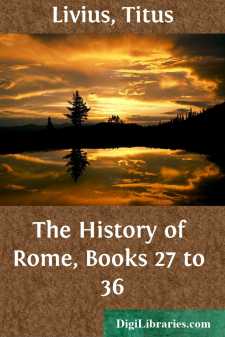 BOOK XXVII. Cneius Fulvius, proconsul, defeated by Hannibal and slain; the consul, Claudius Marcellus, engages him with better success. Hannibal, raising his camp, retires; Marcellus pursues, and forces him to an engagement. They fight twice; in the first battle, Hannibal gains the advantage; in the second, Marcellus. Tarentum betrayed to Fabius Maximus, the consul. Scipio engages with Hasdrubal, the son of Hamilcar, at Baetula, in Spain, and defeats him. Among other prisoners, a youth of royal race and exquisite beauty is taken; Scipio sets him free, and sends him, enriched with magnificent presents, to his uncle Masinissa. Marcellus and Quintus Crispinus, consuls, drawn into an ambuscade by Hannibal; Marcellus is slain, Crispinus escapes. Operations by Publius Sulpicius, praetor, against Philip and the Achaeans. A census held; the number of citizens found to amount to one hundred and thirty-seven thousand one hundred and eight: from which it appears how great a loss they had sustained by the number of unsuccessful battles they had of late been engaged in. Hasdrubal, who had crossed the Alps with a reinforcement for Hannibal, defeated by the consuls, Marcus Livius and Claudius Nero, and slain; with him fell fifty-six thousand men.        *        *        *        *        *

Such was the state of affairs in Spain. In Italy, the consul Marcellus, after regaining Salapia, which was betrayed into his hands, took Maronea and Meles from the Samnites by force. As many as three thousand of the soldiers of Hannibal, which were left as a garrison, were here surprised and overpowered. The booty, and there was a considerable quantity of it, was given up to the troops. Also, two hundred and forty thousand pecks of wheat, with a hundred and ten thousand pecks of barley, were found here. The joy, however, thus occasioned, was by no means so great as a disaster sustained a few days afterwards, not far from the town Herdonea. Cneius Fulvius, the consul, was lying encamped there, in the hope of regaining Herdonea, which had revolted from the Romans after the defeat at Cannae, his position being neither sufficiently secure from the nature of the place, nor strengthened by guards. The natural negligence of the general was now increased by the hope that their attachment to the Carthaginians was shaken when they had heard that Hannibal, after the loss of Salapia, had retired from that neighbourhood into Bruttium. Intelligence of all these circumstances being conveyed to Hannibal by secret messengers from Herdonea, at once excited an anxious desire to retain possession of a city in alliance with him, and inspired a hope of attacking the enemy when unprepared. With a lightly equipped force he hastened to Herdonea by forced marches, so as almost to anticipate the report of his approach and in order to strike greater terror into the enemy, came up with his troops in battle-array....