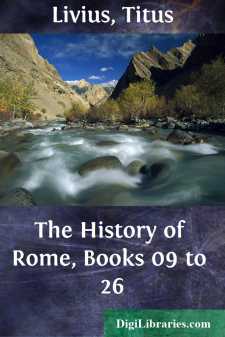 BOOK IX. B.C. 321-304 23 Titus Veturius and Spurius Postumius, with their army, surrounded by the Samnites at the Caudine forks; enter into a treaty, give six hundred hostages, and are sent under the yoke. The treaty declared invalid; the two generals and the other sureties sent back to the Samnites, but are not accepted. Not long after, Papirius Cursor obliterates this disgrace, by vanquishing the Samnites, sending them under the yoke, and recovering the hostages. Two tribes added. Appius Claudius, censor, constructs the Claudian aqueduct, and the Appian road; admits the sons of freedom into the senate. Successes against the Apulians, Etruscans, Umbrians, Marsians, Pelignians, Aequans, and Samnites. Mention made of Alexander the Great, who flourished at this time; a comparative estimate of his strength, and that of the Roman people, tending to show, that if he had carried his arms into Italy, he would not have been as successful there as he had been in the Eastern countries.        *        *        *        *        *

This year is followed by the convention of Caudium, so memorable on account of the misfortune of the Romans, the consuls being Titus Veturius Calvinus and Spurius Postumius. The Samnites had as their commander that year Caius Ponius, son to Herennius, born of a father most highly renowned for wisdom, and himself a consummate warrior and commander. When the ambassadors, who had been sent to make restitution, returned, without concluding a peace, he said, "That ye may not think that no purpose has been effected by this embassy, whatever degree of anger the deities of heaven had conceived against us, on account of the infraction of the treaty, has been hereby expiated. I am very confident, that whatever deities they were, whose will it was that you should be reduced to the necessity of making the restitution, which had been demanded according to the treaty, it was not agreeable to them, that our atonement for the breach of treason should be so haughtily spurned by the Romans. For what more could possibly be done towards appeasing the gods, and softening the anger of men, than we have done? The effects of the enemy, taken among the spoils, which appeared to be our own by the right of war, we restored: the authors of the war, as we could not deliver them up alive, we delivered them dead: their goods we carried to Rome, lest by retaining them, any degree of guilt should remain among us. What more, Roman, do I owe to thee? what to the treaty? what to the gods, the guarantees of the treaty? What arbitrator shall I call in to judge of your resentment, and of my punishment? I decline none; neither nation nor private person. But if nothing in human law is left to the weak against stronger, I will appeal to the gods, the avengers of intolerant arrogance, and will beseech them to turn their wrath against those for whom neither the restoration of their own effects nor additional heaps of other men's property, can suffice, whose cruelty is not satiated by the death of the guilty, by the surrender of their lifeless bodies, nor by their goods accompanying the surrender of the owner; who cannot be appeased otherwise than by giving them our blood to drink, and our entrails to be torn....