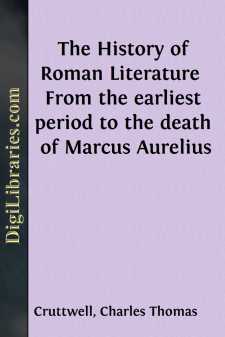 In the latter part of the seventeenth century, and during nearly the whole of the eighteenth, the literature of Rome exercised an imperial sway over European taste. Pope thought fit to assume an apologetic tone when he clothed Homer in an English dress, and reminded the world that, as compared with Virgil, the Greek poet had at least the merit of coming first. His own mind was of an emphatically Latin order. The great poets of his day mostly based their art on the canons recognised by Horace. And when poetry was thus affected, it was natural that philosophy, history, and criticism should yield to the same influence. A rhetorical form, a satirical spirit, and an appeal to common sense as supreme judge, stamp most of the writers of western Europe as so far pupils of Horace, Cicero, and Tacitus. At present the tide has turned. We are living in a period of strong reaction. The nineteenth century not only differs from the eighteenth, but in all fundamental questions is opposed to it. Its products have been strikingly original. In art, poetry, science, the spread of culture, and the investigation of the basis of truth, it yields to no other epoch of equal length in the history of modern times. If we go to either of the nations of antiquity to seek for an animating impulse, it will not be Rome but Greece that will immediately suggest itself to us. Greek ideas of aesthetic beauty, and Greek freedom of abstract thought, are being disseminated in the world with unexampled rapidity. Rome, and her soberer, less original, and less stimulating literature, find no place for influence. The readiness with which the leading nations drink from the well of Greek genius points to a special adaptation between the two. Epochs of upheaval, when thought is rife, progress rapid, and tradition, political or religious, boldly examined, turn, as if by necessity, to ancient Greece for inspiration. The Church of the second and third centuries, when Christian thought claimed and won its place among the intellectual revolutions of the world, did not disdain the analogies of Greek philosophy. The Renaissance owed its rise, and the Reformation much of its fertility, to the study of Greek. And the sea of intellectual activity which now surges round us moves ceaselessly about questions which society has not asked itself since Greece started them more than twenty centuries age. On the other hand, periods of order, when government is strong and progress restrained, recognise their prototypes in the civilisation of Rome, and their exponents in her literature. Such was the time of the Church's greatest power: such was also that of the fully developed monarchy in France, and of aristocratic ascendancy in England. Thus the two literatures wield alternate influence; the one on the side of liberty, the other on the side of government; the one as urging restless movement towards the ideal, the other as counselling steady acceptance of the real.

From a more restricted point of view, the utility of Latin literature may be sought in the practical standard of its thought, and in the almost faultless correctness of its composition....