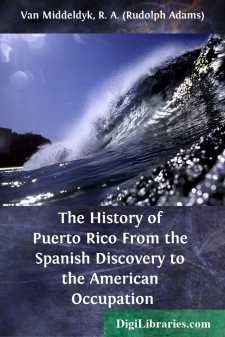 PART I HISTORICAL CHAPTER I THE DEPARTURE

Eight centuries of a gigantic struggle for supremacy between the Crescent and the Cross had devastated the fairest provinces of the Spanish Peninsula. Boabdil, the last of the Moorish kings, had delivered the keys of Granada into the hands of Queen Isabel, the proud banner of the united kingdoms of Castile and Aragon floated triumphant from the walls of the Alhambra, and Providence, as if to recompense Iberian knighthood for turning back the tide of Moslem conquest, which threatened to overrun the whole of meridional Europe, had laid a new world, with all its inestimable treasures and millions of benighted inhabitants, at the feet of the Catholic princes.

Columbus had just returned from his first voyage. He had been scorned as an adventurer by the courtiers of Lisbon, mocked as a visionary by the learned priests of the Council in Salamanca, who, with texts from the Scriptures and quotations from the saints, had tried to convince him that the world was flat; he had been pointed at by the rabble in the streets as a madman who maintained that there was a land where the people walked with their heads down; and, after months of trial, he had been able to equip his three small craft and collect a crew of ninety men only by the aid of a royal schedule offering exemption from punishment for offenses against the laws to all who should join the expedition.

At last he had sailed amid the murmurs of an incredulous crowd, who thought him and his companions doomed to certain destruction, and now he had returned[1] bringing with him the living proofs of what he had declared to exist beyond that mysterious ocean, and showed to the astounded people samples of the unknown plants and animals, and of the gold which he had said would be found there in fabulous quantities.

It was the proudest moment of the daring navigator's life when, clad in his purple robe of office, bedecked with the insignia of his rank, he entered the throne-room of the palace in Barcelona and received permission to be seated in the royal presence to relate his experiences. Around the hall stood the grandees of Spain and the magnates of the Church, as obsequious and attentive to him now as they had been proud and disdainful when, a hungry wanderer, he had knocked at the gates of La Rabida to beg bread for his son. It was the acme of the discoverer's destiny, the realization of his dream of glory, the well-earned recompense of years of persevering endeavor.

The news of the discovery created universal enthusiasm. When it was announced that a second expedition was being organized there was no need of a royal schedule of remission of punishment to criminals to obtain crews. The Admiral's residence was besieged all day long by the hidalgos[2] who were anxious to share with him the expected glories and riches. The cessation of hostilities in Granada had left thousands of knights, whose only patrimony was their sword, without occupation—men with iron muscles, inured to hardship and danger, eager for adventure and conquest....