The History of Pendennis, Volume 2 His Fortunes and Misfortunes, His Friends and His Greatest Enemy 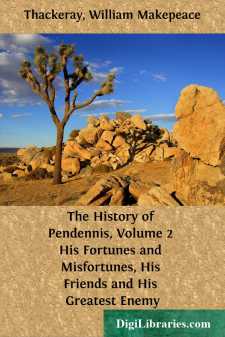 Since that fatal but delightful night in Grosvenor place, Mr. Harry Foker's heart had been in such a state of agitation as you would hardly have thought so great a philosopher could endure. When we remember what good advice he had given to Pen in former days, how an early wisdom and knowledge of the world had manifested itself in the gifted youth; how a constant course of self-indulgence, such as becomes a gentleman of his means and expectations, ought by right to have increased his cynicism, and made him, with every succeeding day of his life, care less and less for every individual in the world, with the single exception of Mr. Harry Foker, one may wonder that he should fall into the mishap to which most of us are subject once or twice in our lives, and disquiet his great mind about a woman. But Foker, though early wise, was still a man. He could no more escape the common lot than Achilles, or Ajax, or Lord Nelson, or Adam our first father, and now, his time being come, young Harry became a victim to Love, the All-conqueror.

When he went to the Back Kitchen that night after quitting Arthur Pendennis at his staircase-door in Lamb-court, the gin-twist and deviled turkey had no charms for him, the jokes of his companions fell flatly on his ear; and when Mr. Hodgen, the singer of "The Body Snatcher," had a new chant even more dreadful and humorous than that famous composition, Foker, although he appeared his friend, and said "Bravo Hodgen," as common politeness, and his position as one of the chiefs of the Back Kitchen bound him to do, yet never distinctly heard one word of the song, which under its title of "The Cat in the Cupboard," Hodgen has since rendered so famous. Late and very tired, he slipped into his private apartments at home and sought the downy pillow, but his slumbers were disturbed by the fever of his soul, and the very instant that he woke from his agitated sleep, the image of Miss Amory presented itself to him, and said, "Here I am, I am your princess and beauty, you have discovered me, and shall care for nothing else hereafter."

Heavens, how stale and distasteful his former pursuits and friendships appeared to him! He had not been, up to the present time, much accustomed to the society of females of his own rank in life. When he spoke of such, he called them "modest women." That virtue which, let us hope they possessed, had not hitherto compensated to Mr. Foker for the absence of more lively qualities which most of his own relatives did not enjoy, and which he found in Mesdemoiselles, the ladies of the theater. His mother, though good and tender, did not amuse her boy; his cousins, the daughters of his maternal uncle, the respectable Earl of Rosherville, wearied him beyond measure. One was blue, and a geologist; one was a horsewoman, and smoked cigars; one was exceedingly Low Church, and had the most heterodox views on religious matters; at least, so the other said, who was herself of the very Highest Church faction, and made the cupboard in her room into an oratory, and fasted on every Friday in the year....