The History of Mary Prince A West Indian Slave 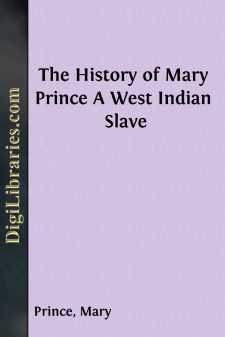 THE HISTORY OF MARY PRINCE, A WEST INDIAN SLAVE. (Related by herself.)

I was born at Brackish-Pond, in Bermuda, on a farm belonging to Mr. Charles Myners. My mother was a household slave; and my father, whose name was Prince, was a sawyer belonging to Mr. Trimmingham, a ship-builder at Crow-Lane. When I was an infant, old Mr. Myners died, and there was a division of the slaves and other property among the family. I was bought along with my mother by old Captain Darrel, and given to his grandchild, little Miss Betsey Williams. Captain Williams, Mr. Darrel's son-in-law, was master of a vessel which traded to several places in America and the West Indies, and he was seldom at home long together.

Mrs. Williams was a kind-hearted good woman, and she treated all her slaves well. She had only one daughter, Miss Betsey, for whom I was purchased, and who was about my own age. I was made quite a pet of by Miss Betsey, and loved her very much. She used to lead me about by the hand, and call me her little nigger. This was the happiest period of my life; for I was too young to understand rightly my condition as a slave, and too thoughtless and full of spirits to look forward to the days of toil and sorrow.

My mother was a household slave in the same family. I was under her own care, and my little brothers and sisters were my play-fellows and companions. My mother had several fine children after she came to Mrs. Williams,—three girls and two boys. The tasks given out to us children were light, and we used to play together with Miss Betsey, with as much freedom almost as if she had been our sister.

My master, however, was a very harsh, selfish man; and we always dreaded his return from sea. His wife was herself much afraid of him; and, during his stay at home, seldom dared to shew her usual kindness to the slaves. He often left her, in the most distressed circumstances, to reside in other female society, at some place in the West Indies of which I have forgot the name. My poor mistress bore his ill-treatment with great patience, and all her slaves loved and pitied her. I was truly attached to her, and, next to my own mother, loved her better than any creature in the world. My obedience to her commands was cheerfully given: it sprung solely from the affection I felt for her, and not from fear of the power which the white people's law had given her over me.

I had scarcely reached my twelfth year when my mistress became too poor to keep so many of us at home; and she hired me out to Mrs. Pruden, a lady who lived about five miles off, in the adjoining parish, in a large house near the sea. I cried bitterly at parting with my dear mistress and Miss Betsey, and when I kissed my mother and brothers and sisters, I thought my young heart would break, it pained me so. But there was no help; I was forced to go. Good Mrs. Williams comforted me by saying that I should still be near the home I was about to quit, and might come over and see her and my kindred whenever I could obtain leave of absence from Mrs. Pruden. A few hours after this I was taken to a strange house, and found myself among strange people. This separation seemed a sore trial to me then; but oh! 'twas light, light to the trials I have since endured!—'twas nothing—nothing to be mentioned with them; but I was a child then, and it was according to my strength.

I knew that Mrs. Williams could no longer maintain me; that she was fain to part with me for my food and clothing; and I tried to submit myself to the change. My new mistress was a passionate woman; but yet she did not treat me very unkindly. I do not remember her striking me but once, and that was for going to see Mrs. Williams when I heard she was sick, and staying longer than she had given me leave to do. All my employment at this time was nursing a sweet baby, little Master Daniel; and I grew so fond of my nursling that it was my greatest delight to walk out with him by the sea-shore, accompanied by his brother and sister, Miss Fanny and Master James.—Dear Miss Fanny! She was a sweet, kind young lady, and so fond of me that she wished me to learn all that she knew herself; and her method of teaching me was as follows:—Directly she had said her lessons to her grandmamma, she used to come running to me, and make me repeat them one by one after her; and in a few months I was able not only to say my letters but to spell many small words. But this happy state was not to last long. Those days were too pleasant to last. My heart always softens when I think of them.

At this time Mrs. Williams died. I was told suddenly of her death, and my grief was so great that, forgetting I had the baby in my arms, I ran away directly to my poor mistress's house; but reached it only in time to see the corpse carried out. Oh, that was a day of sorrow,—a heavy day! All the slaves cried. My mother cried and lamented her sore; and I (foolish creature!) vainly entreated them to bring my dear mistress back to life. I knew nothing rightly about death then, and it seemed a hard thing to bear. When I thought about my mistress I felt as if the world was all gone wrong; and for many days and weeks I could think of nothing else. I returned to Mrs. Pruden's; but my sorrow was too great to be comforted, for my own dear mistress was always in my mind....