The History of England, from the Accession of James II - Volume 5 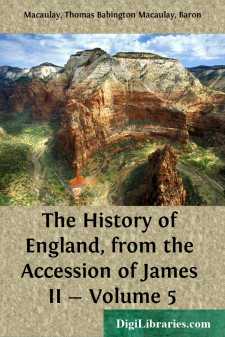 PREFACE TO THE FIFTH VOLUME.

I HAVE thought it right to publish that portion of the continuation of the "History of England" which was fairly transcribed and revised by Lord Macaulay. It is given to the world precisely as it was left: no connecting link has been added; no reference verified; no authority sought for or examined. It would indeed have been possible, with the help I might have obtained from his friends, to have supplied much that is wanting; but I preferred, and I believe the public will prefer, that the last thoughts of the great mind passed away from among us should be preserved sacred from any touch but his own. Besides the revised manuscript, a few pages containing the first rough sketch of the last two months of William's reign are all that is left. From this I have with some difficulty deciphered the account of the death of William. No attempt has been made to join it on to the preceding part, or to supply the corrections which would have been given by the improving hand of the author. But, imperfect as it must be, I believe it will be received with pleasure and interest as a fit conclusion to the life of his great hero.

I will only add my grateful thanks for the kind advice and assistance given me by his most dear and valued friends, Dean Milman and Mr. Ellis.

THE rejoicings, by which London, on the second of December 1697, celebrated the return of peace and prosperity, continued till long after midnight. On the following morning the Parliament met; and one of the most laborious sessions of that age commenced.

Among the questions which it was necessary that the Houses should speedily decide, one stood forth preeminent in interest and importance. Even in the first transports of joy with which the bearer of the treaty of Ryswick had been welcomed to England, men had eagerly and anxiously asked one another what was to be done with that army which had been formed in Ireland and Belgium, which had learned, in many hard campaigns, to obey and to conquer, and which now consisted of eighty-seven thousand excellent soldiers....