The History of England, from the Accession of James II - Volume 3 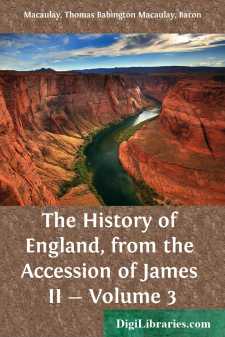 THE Revolution had been accomplished. The decrees of the Convention were everywhere received with submission. London, true during fifty eventful years to the cause of civil freedom and of the reformed religion, was foremost in professing loyalty to the new Sovereigns. Garter King at arms, after making proclamation under the windows of Whitehall, rode in state along the Strand to Temple Bar. He was followed by the maces of the two Houses, by the two Speakers, Halifax and Powle, and by a long train of coaches filled with noblemen and gentlemen. The magistrates of the City threw open their gates and joined the procession. Four regiments of militia lined the way up Ludgate Hill, round Saint Paul's Cathedral, and along Cheapside. The streets, the balconies, and the very housetops were crowded with gazers. All the steeples from the Abbey to the Tower sent forth a joyous din. The proclamation was repeated, with sound of trumpet, in front of the Royal Exchange, amidst the shouts of the citizens.

In the evening every window from Whitechapel to Piccadilly was lighted up. The state rooms of the palace were thrown open, and were filled by a gorgeous company of courtiers desirous to kiss the hands of the King and Queen. The Whigs assembled there, flushed with victory and prosperity. There were among them some who might be pardoned if a vindictive feeling mingled with their joy. The most deeply injured of all who had survived the evil times was absent. Lady Russell, while her friends were crowding the galleries of Whitehall, remained in her retreat, thinking of one who, if he had been still living, would have held no undistinguished place in the ceremonies of that great day. But her daughter, who had a few months before become the wife of Lord Cavendish, was presented to the royal pair by his mother the Countess of Devonshire. A letter is still extant in which the young lady described with great vivacity the roar of the populace, the blaze in the streets, the throng in the presence chamber, the beauty of Mary, and the expression which ennobled and softened the harsh features of William. But the most interesting passage is that in which the orphan girl avowed the stern delight with which she had witnessed the tardy punishment of her father's murderer.

The example of London was followed by the provincial towns. During three weeks the Gazettes were filled with accounts of the solemnities by which the public joy manifested itself, cavalcades of gentlemen and yeomen, processions of Sheriffs and Bailiffs in scarlet gowns, musters of zealous Protestants with orange flags and ribands, salutes, bonfires, illuminations, music, balls, dinners, gutters running with ale and conduits spouting claret.

Still more cordial was the rejoicing among the Dutch, when they learned that the first minister of their Commonwealth had been raised to a throne. On the very day of his accession he had written to assure the States General that the change in his situation had made no change in the affection which he bore to his native land, and that his new dignity would, he hoped, enable him to discharge his old duties more efficiently than ever. That oligarchical party, which had always been hostile to the doctrines of Calvin and to the House of Orange, muttered faintly that His Majesty ought to resign the Stadtholdership. But all such mutterings were drowned by the acclamations of a people proud of the genius and success of their great countryman. A day of thanksgiving was appointed. In all the cities of the Seven Provinces the public joy manifested itself by festivities of which the expense was chiefly defrayed by voluntary gifts. Every class assisted. The poorest labourer could help to set up an arch of triumph, or to bring sedge to a bonfire. Even the ruined Huguenots of France could contribute the aid of their ingenuity. One art which they had carried with them into banishment was the art of making fireworks; and they now, in honour of the victorious champion of their faith, lighted up the canals of Amsterdam with showers of splendid constellations....