The History of England, from the Accession of James II - Volume 1 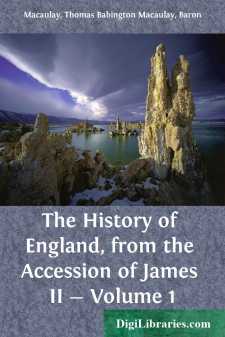 I PURPOSE to write the history of England from the accession of King James the Second down to a time which is within the memory of men still living. I shall recount the errors which, in a few months, alienated a loyal gentry and priesthood from the House of Stuart. I shall trace the course of that revolution which terminated the long struggle between our sovereigns and their parliaments, and bound up together the rights of the people and the title of the reigning dynasty. I shall relate how the new settlement was, during many troubled years, successfully defended against foreign and domestic enemies; how, under that settlement, the authority of law and the security of property were found to be compatible with a liberty of discussion and of individual action never before known; how, from the auspicious union of order and freedom, sprang a prosperity of which the annals of human affairs had furnished no example; how our country, from a state of ignominious vassalage, rapidly rose to the place of umpire among European powers; how her opulence and her martial glory grew together; how, by wise and resolute good faith, was gradually established a public credit fruitful of marvels which to the statesmen of any former age would have seemed incredible; how a gigantic commerce gave birth to a maritime power, compared with which every other maritime power, ancient or modern, sinks into insignificance; how Scotland, after ages of enmity, was at length united to England, not merely by legal bonds, but by indissoluble ties of interest and affection; how, in America, the British colonies rapidly became far mightier and wealthier than the realms which Cortes and Pizarro had added to the dominions of Charles the Fifth; how in Asia, British adventurers founded an empire not less splendid and more durable than that of Alexander.

Nor will it be less my duty faithfully to record disasters mingled with triumphs, and great national crimes and follies far more humiliating than any disaster. It will be seen that even what we justly account our chief blessings were not without alloy. It will be seen that the system which effectually secured our liberties against the encroachments of kingly power gave birth to a new class of abuses from which absolute monarchies are exempt. It will be seen that, in consequence partly of unwise interference, and partly of unwise neglect, the increase of wealth and the extension of trade produced, together with immense good, some evils from which poor and rude societies are free. It will be seen how, in two important dependencies of the crown, wrong was followed by just retribution; how imprudence and obstinacy broke the ties which bound the North American colonies to the parent state; how Ireland, cursed by the domination of race over race, and of religion over religion, remained indeed a member of the empire, but a withered and distorted member, adding no strength to the body politic, and reproachfully pointed at by all who feared or envied the greatness of England....