The History of Cuba, vol. 4 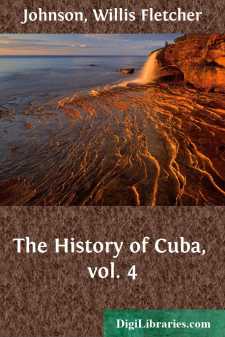 Cuba for Cuba must be the grateful theme of the present volume. We have seen the identification of the Queen of the Antilles with the Spanish discovery and conquest of America. We have traced the development of widespread international interests in that island, especially implicating the vital attention of at least four great powers. We have reviewed the origin and development of a peculiar relationship, frequently troubled but ultimately beneficent to both, between Cuba and the United States of America. Now, in the briefest of the four major epochs into which Cuban history is naturally divided, we shall have the welcome record of the achievement of Cuba's secure establishment among the sovereign nations of the world.

The time for the War of Independence was well chosen. That conflict was, indeed, a necessary and inevitable sequel to the Ten Years' War and its appendix, the Little War; under the same flag, with the same principles and issues, and with some of the same leaders. Indeed we may rightly claim that the organization of the Cuban Republic remained continuous and unbroken, if not in Cuba itself, at least in the United States, where, in New York, the Cuban Junta was ever active and resolute. The Treaty of Zanjon ended field operations for the time. It did not for one moment or in the least degree quench or diminish the impassioned and resolute determination of the Cuban people to become a nation.{2}

We have said that the War of Independence was inevitable. That was manifestly so because of the determination of the Cubans to become independent. It was also because of the failure of the Spanish government to fulfil the terms and stipulations of the Treaty of Zanjon, concerning which we have hitherto spoken. It must remain a matter of speculation whether that government ever intended to fulfil them. It is certain that few thoughtful Cubans, capable of judging the probabilities of the future by the actualities of the past, expected that it would do so. We may also regard it as certain that even a scrupulous fulfilment of those terms, while it might have postponed it, would not and could not permanently have defeated the assertion of Cuban independence.

Journalist, critic, poet and patriot, Ricardo del Monte was born at Cimorrones in 1830, and was educated in the United States and Europe. In Rome he was attached to the Spanish embassy. In Spain he was a journalist with liberal and democratic tendencies. He returned to Cuba in 1847 and edited several papers in Havana, including, after the Ten Years War, El Triunfo and El Pais, the organ of the Autonomists. He was a writer in prose and verse of singular power and grace, his works ranking in style with the best of modern Spanish literature. He died in 1908.

The Cuban Revolutionary Party, which as we have said never went out of existence, was reorganized for renewed activity in New York in April, 1892; from which time we may properly date the beginning of the War of Independence. Its leader was Jose Marti, of whom we shall have much more to say hereafter; but he did not accept the official headship of the Junta.{3} That place was taken by Tomas Estrada Palma, the honored veteran of the Ten Years' War, who at this time was the principal of an excellent boys' school at Central Valley, New York. He was the President of the Junta. The Secretary was Gonzalo de Quesada, worthy bearer of an honored name; a fervent patriot and an eloquent orator. The Treasurer was Benjamin Guerra, an approved patriot, and the General Counsel was Horatio Rubens. This New York Junta, meeting at No. 56 New Street, New York City, was the real head of the whole movement. But it was supplemented by many other Cuban clubs elsewhere. There were ten in New York, 61 at Key West, Florida; 15 at Tampa, two at Ocala, two in Philadelphia, and one each at New Orleans, Jacksonville, Brooklyn, Boston, Chicago, Atlanta, and St. Augustine. There were also six in the island of Jamaica, two in Mexico, and one in Hayti.

The multiplication of these organizations and their increasing activity did not escape the observation of the Spanish government, which realized that revolution was in the air, and that it behooved it to do something to counteract it if it was to avoid losing the last remains of its once vast American empire. Accordingly early in 1893 the Cortes at Madrid enacted a bill extending the electoral franchise in Cuba to all men paying each as much as five pesos tax yearly....