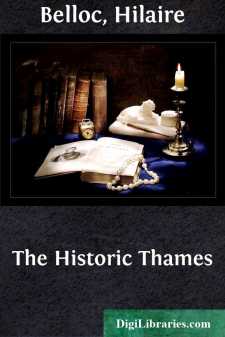 England has been built up upon the framework of her rivers, and, in that pattern, the principal line has been the line of the Thames.

Among the most favoured of our rivals some one river system has developed a province or a series of provinces; the Rhine has done so, the Seine and the Garonne. But the great Continental river systems—at least the navigable ones—stand far apart from one another: in this small, and especially narrow, country of Britain navigable river systems are not only numerous, but packed close together. It is perhaps on this account that we have been under less necessity in the past to develop our canals; and anyone who has explored the English rivers in a light boat knows how short are the portages between one basin and another.

Now not only are we favoured with a multitude of navigable waterways—the tide makes even our small coastal rivers navigable right inland—but also we are quite exceptionally favoured in them when we consider that the country is an island.

If an island, especially an island in a tidal sea, has a good river system, that system is bound to be of more benefit to it than would be a similar system to a Continental country. For it must mean that the tide will penetrate everywhere into the heart of the plains, carrying the burden of their wealth backward and forward, mixing their peoples, and filling the whole national life with its energy; and this will be especially the case in an island which is narrow in proportion to its length and in which the rivers are distributed transversely to its axis.

When we consider the river systems of the other great islands of Europe we find that none besides our own enjoys this advantage. Sicily and Crete, apart from the fact that they do not stand in tidal water, have no navigable rivers. Iceland, standing in a tidal sea, too far north indeed for successful commerce, but not too far north for the growth of a civilisation, is at a similar disadvantage. Great Britain and Ireland alone—Great Britain south of the Scottish Mountains, that is—enjoy this peculiar advantage; and there are few things more instructive when one is engaged upon the history of England than to take a map and mark upon it the head of each navigable piece of water and the head of its tideway, for when this has been done all England, with the exception of the Welsh Hills and the Pennines, seems to be penetrated by the influence of the sea.

The conditions which give a river this great historic importance, the fundamental character, therefore, which has lent to the Thames its meaning in English history, is twofold: a river affords a permanent means of travel, and a river also forms an obstacle and a boundary....