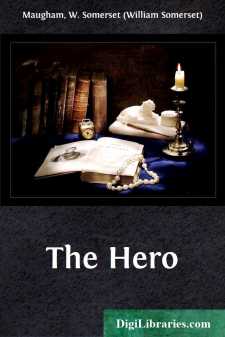 Colonel Parsons sat by the window in the dining-room to catch the last glimmer of the fading day, looking through his Standard to make sure that he had overlooked no part of it. Finally, with a little sigh, he folded it up, and taking off his spectacles, put them in their case.

"Have you finished the paper?" asked his wife

He looked out of window at the well-kept drive that led to the house, and at the trim laurel bushes which separated the front garden from the village green. His eyes rested, with a happy smile, upon the triumphal arch which decorated the gate for the home-coming of his son, expected the next day from South Africa. Mrs. Parsons knitted diligently at a sock for her husband, working with quick and clever fingers. He watched the rapid glint of the needles.

"You'll try your eyes if you go on much longer with this light, my dear."

"Oh, I don't require to see," replied his wife, with a gentle, affectionate smile. But she stopped, rather tired, and laying the sock on the table, smoothed it out with her hand.

"I shouldn't mind if you made it a bit higher in the leg than the last pair."

She went to the window so that the Colonel might show the exact length he desired; and when he had made up his mind, sat down again quietly on her chair by the fireside, with hands crossed on her lap, waiting placidly for the maid to bring the lamp.

Mrs. Parsons was a tall woman of fifty-five, carrying herself with a certain diffidence, as though a little ashamed of her stature, greater than the Colonel's; it had seemed to her through life that those extra inches savoured, after a fashion, of disrespect. She knew it was her duty spiritually to look up to her husband, yet physically she was always forced to look down. And eager to prevent even the remotest suspicion of wrong-doing, she had taken care to be so submissive in her behaviour as to leave no doubt that she recognised the obligation of respectful obedience enjoined by the Bible, and confirmed by her own conscience. Mrs. Parsons was the gentlest of creatures, and the most kind-hearted; she looked upon her husband with great and unalterable affection, admiring intensely both his head and his heart. He was her type of the upright man, walking in the ways of the Lord. You saw in the placid, smooth brow of the Colonel's wife, in her calm eyes, even in the severe arrangement of the hair, parted in the middle and drawn back, that her character was frank, simple, and straightforward. She was a woman to whom evil had never offered the smallest attraction; she was merely aware of its existence theoretically. To her the only way of life had been that which led to God; the others had been non-existent. Duty had one hand only, and only one finger; and that finger had always pointed definitely in one direction. Yet Mrs. Parsons had a firm mouth, and a chin square enough to add another impression. As she sat motionless, hands crossed, watching her husband with loving eyes, you might have divined that, however kind-hearted, she was not indulgent, neither lenient to her own faults nor to those of others; perfectly unassuming, but with a sense of duty, a feeling of the absolute rightness of some deeds and of the absolute wrongness of others, which would be, even to those she loved best in the world, utterly unsparing....