The Heart's Secret; Or, the Fortunes of a Soldier: a Story of Love and the Low Latitudes. 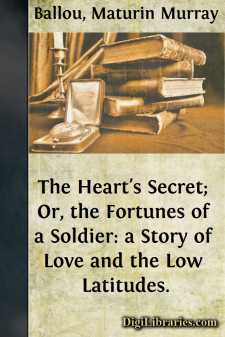 CHAPTER I. THE ACCIDENT.

THE soft twilight of the tropics, that loves to linger over the low latitudes, after the departure of the long summer's day, was breathing in zephyrs of aromatic sweetness over the shores and plains of the beautiful Queen of the Antilles. The noise and bustle of the day had given place to the quiet and gentle influences of the hour; the slave had laid by his implements of labor, and now stood at ease, while the sunburnt overseers had put off the air of vigilance that they had worn all day, and sat or lounged lazily with their cigars.

Here and there strolled a Montaro from the country, who, having disposed of his load of fruit, of produce and fowls, was now preparing to return once more inland, looking, with his long Toledo blade and heavy spurs, more like a bandit than an honest husbandman. The evening gun had long since boomed over the waters of the land-locked harbor from the grim, walls of Moro Castle, the guard had been relieved at the governor's palace and the city walls, and now the steady martial tread to the tap of the drum rang along the streets of Havana, as the guard once more sought their barracks in the Plaza des Armes.

The pretty senoritas sat at their grated windows, nearly on a level with the street, and chatted through the bars, not unlike prisoners, to those gallants who paused to address them. And now a steady line of pedestrians turned their way to the garden that fronts the governor's palace, where they might listen to the music of the band, nightly poured forth here to rich and poor.

At this peculiar hour there was a small party walking in the broad and very private walk that skirts the seaward side of the city, nearly opposite the Moro, and known as the Plato. It is the only hour in which a lady can appear outside the walls of her dwelling on foot in this queer and picturesque capital, and then only in the Plaza, opposite to the palace, or in some secluded and private walk like the Plato. Such is Creole and Spanish etiquette.

The party referred to consisted of a fine looking old Spanish don, a lady who seemed to be his daughter, a little boy of some twelve or thirteen years, who might perhaps be the lady's brother, and a couple of gentlemen in undress military attire, yet bearing sufficient tokens of rank to show them to be high in command. The party was a gay though small one, and the lady seemed to be as lively and talkative as the two gentlemen could desire, while they, on their part, appeared most devoted to every syllable and gesture.

There was a slight air of hauteur in the lady's bearing; she seemed to half disdain the homage that was so freely tendered to her, and though she laughed loud and clear, there was a careless, not to say heartless, accent in her tones, that betrayed her indifference to the devoted attentions of her companions. Apparently too much accustomed to this treatment to be disheartened by it, the two gentlemen bore themselves most courteously, and continued as devoted as ever to the fair creature by their side....