The Heart of Rachael 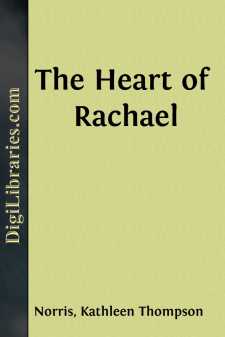 The day had opened so brightly, in such a welcome wave of April sunshine, that by mid-afternoon there were two hundred players scattered over the links of the Long Island Country Club at Belvedere Bay; the men in thick plaid stockings and loose striped sweaters, the women's scarlet coats and white skirts making splashes of vivid color against the fresh green of grass and the thick powdering of dandelions. It was Saturday, and a half- holiday; it was that one day of all the year when the seasons change places, when winter is visibly worsted, and summer, with warmth and relaxation, bathing and tennis and motor trips in the moonlight, becomes again a reality.

There was a real warmth in the sunshine to-day, there was a fragrance of lilac and early roses in the idle breezes. "Hot!" shouted the players exultantly, as they passed each other in the green valleys and over the sunny mounds. "You bet it's hot!" agreed stout and glowing gentlemen, wiping wet foreheads before reaching for a particular club, and panting as they gazed about at the unbroken turf, melting a few miles away into the new green of maple and elm trees, and topped, where the slope rose, by the white columns and brick walls of the clubhouse.

Motor cars swept incessantly back and forth on the smooth roadway; a few riders, their horses wheeling and dancing, went down the bridle path, and there was a sprinkling of young men and women and some shouting and clapping on the tennis-courts. But golf was the order of the day. At the first tee at least two scores of impatient players waited their turn to drive off, and at the last green a group of twenty or thirty men and women, mostly women, were interestedly watching the putting.

Mrs. Archibald Buckney, a large, generously made woman of perhaps fifty, who stood a little apart from the group, with two young women and a mild-looking blond young man, suddenly interrupted a general discussion of scores and play with a personality.

"Is Clarence Breckenridge playing to-day, I wonder? Anybody seen him?"

"Must be," said the more definite of the two rather indefinite girls, with an assumption of bright interest. Leila Buckney, a few weeks ago, had announced her engagement to the mild-looking blond young man, Parker Hoyt, and she was just now attempting to hold him by a charm she suspected she did not possess for him, and at the same time to give her mother and sister the impression that Parker was so deeply in her toils that she need make no further effort to enslave him.

She had really nothing in common with Parker; their conversation was composed entirely of personalities about their various friends, and Leila felt it a great burden, and dreaded the hours she must perforce spend alone with her future husband. It would be much better when they were married, of course, but they could not even begin to talk wedding plans yet, because Parker lived in nervous terror of his aunt's disapproval, and Mrs. Watts Frothingham was just now in Europe, and had not yet seen fit to answer her nephew's dignified notification of his new plans, or the dutiful and gracious note with which Miss Leila had accompanied it....