The Healing of Nations and the Hidden Sources of Their Strife 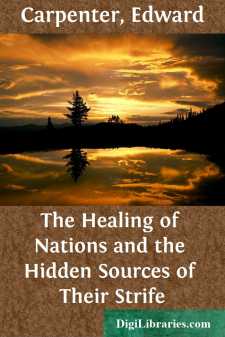 The following Studies and Notes, made during the earlier period of the present war and now collected together for publication, do notвЂ”as will be evident to the readerвЂ”pretend to any sort of completeness in their embrace of the subject, or finality in its presentation. Rather they are scattered thoughts suggested by the large and tangled drama which we are witnessing; and I am sufficiently conscious that their expression involves contradictions as well as repetitions.

The truth is that affairs of this kindвЂ”like all the great issues of human life, Love, Politics, Religion, and so forth, do not, at their best, admit of final dispatch in definite views and phrases. They are too vast and complex for that. It is, indeed, quite probable that such things cannot be adequately represented or put before the human mind without logical inconsistencies and contradictions. But (perhaps for that very reason) they are the subjects of the most violent and dogmatic differences of opinion. Nothing people quarrel about more bitterly than PoliticsвЂ”unless it be Religion: both being subjects of which all that one can really say for certain isвЂ”that nobody understands them.

When, as in the present war, a dozen or more nations enter into conflict and hurl at each other accusations of the angriest sort (often quite genuinely made and yet absolutely irreconcilable one with another), and when on the top of that scores and hundreds of writers profess to explain the resulting situation in a few brief phrases (but unfortunately their explanations are all different), and calmly affix the blame on "Russia" or "Germany" or "France" or "England"вЂ”just as if these names represented certain responsible individuals, supposed for the purposes of the argument to be of very wily and far-scheming dispositionвЂ”whereas it is perfectly well known that they really represent most complex whirlpools of political forces, in which the merest accidents (as whether two members of a Cabinet have quarrelled, or an Ambassador's dinner has disagreed with him) may result in a long and fatal train of consequencesвЂ”it becomes obvious that all so-called "explanations" (though it may be right that they should be attempted) fall infinitely short, of the reality.[1]

Feeling thus the impossibility of dealing at all adequately with the present situation, I have preferred to take here and there just an aspect of it for consideration, with a view especially to the differences between Germany and England. I have thought that instead of spending time over recriminations one might be on safer ground by trying to get at the root-causes of this war (and other wars), thus making one's conclusions to some degree independent of a multitude of details and accidents, most of which must for ever remain unknown to us.

There are in general four rather well-marked species of warsвЂ”Religious wars, Race wars, wars of Ambition and Conquest, and wars of Acquisition and ProfitвЂ”though in any particular case the four species may be more or less mingled....