The Head of the Family Sailor's Knots, Part 9. 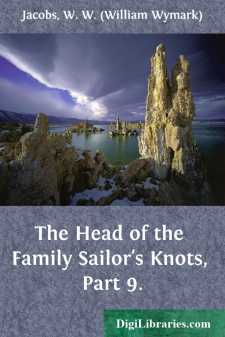 THE HEAD OF THE FAMILY

Mr. Letts had left his ship by mutual arrangement, and the whole of the crew had mustered to see him off and to express their sense of relief at his departure. After some years spent in long voyages, he had fancied a trip on a coaster as a change, and, the schooner Curlew having no use for a ship's carpenter, had shipped as cook. He had done his best, and the unpleasant epithets that followed him along the quay at Dunchurch as he followed in the wake of his sea-chest were the result. Master and mate nodded in grim appreciation of the crew's efforts.

He put his chest up at a seamen's lodging-house, and, by no means perturbed at this sudden change in his fortunes, sat on a seat overlooking the sea, with a cigarette between his lips, forming plans for his future. His eyes closed, and he opened them with a start to find that a middle-aged woman of pleasant but careworn appearance had taken the other end of the bench.

The woman assented and sat looking over the sea.

"Plenty," was the surprised reply. "Why?"

"I just wanted to ask you how long you would boil a bit o' beef," said Mr. Letts. "Only from curiosity; I should never ship as cook again."

He narrated his experience of the last few days, and, finding the listener sympathetic, talked at some length about himself and his voyages; also of his plans for the future.

"At least, I suppose he would have been like you," said the other; "but it's nine years ago now. He was just sixteen."

Mr. Letts—after a calculation—nodded. "Just my age," he said. "I was twenty-five last March."

"Sailed for Melbourne," said the woman. "My only boy."

"His father died a week after he sailed," continued the other, "and three months afterwards my boy's ship went down. Two years ago, like a fool, I married again. I don't know why I'm talking to you like this. I suppose it is because you remind me of him."

He lit another cigarette, and, sitting in an attitude of attention, listened to a recital of domestic trouble that made him congratulate himself upon remaining single.

"Since I married Mr. Green I can't call my soul my own," said the victim of matrimony as she rose to depart. "If my poor boy had lived things would have been different. His father left the house and furniture to him, and that's all my second married me for, I'm sure. That and the bit o' money that was left to me. He's selling some of my boy's furniture at this very moment. That's why I came out; I couldn't bear it."