The Haunters of the Silences A Book of Animal Life 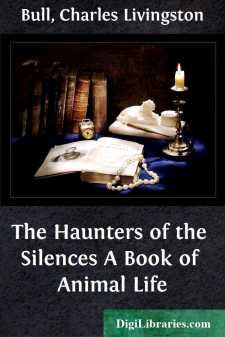 The Summons of the North I

N the mystic gloom and the incalculable cold of the long Arctic night, when Death seemed the only inhabitant of the limitless vasts of ice and snow, the white bear cub was born. Over the desolate expanses swept the awful polar wind, now thick with fine, crystalline snow which volleyed and whirled and bit like points of steel, now glassy clear, so that the great, unwavering Arctic stars could preside unobscured over its destructive fury. When the wind was still, not less awful than the wind had been was the stillness, in which the unspeakable cold wrought secretly its will upon the abandoned world. Sometimes the implacable starlight would pale suddenly, and the lovely, sinister, spectral flames of the aurora, electric blue, and violet, and thin, elusive red, would go dancing in terrible silence across the arch of sky.

But the white cub—contrary to the custom of her kind his mother had borne but the one, instead of two—felt nothing of the cold and the unutterable desolation, saw nothing of the unchanging night, the implacable stars, the heatless and mirthless dancing flames. In a lair between two rocks, under seven or eight feet of snow, he lay snuggled against the warm, furry body of his mother, safe hidden from the world of night and cold. The mother, whose hot breathing kept open a little arched hollow in the sheltering snow, spent practically all her time in sleep, the ample layers of fat which the previous summer had stored upon her ribs supplying food and fuel to her giant frame. The cub, too, slept away most of the long unvarying hours, waking to nurse from time to time, and growing with marvellous rapidity on the inexhaustible nourishment which his mother's milk supplied.

Month followed month, as the night dragged slowly on toward spring and dawn; and still the mother slept, growing thinner day by day; and still the cub slept, and grew, and slept, day by day waxing fatter, and larger, and stronger for the great and terrible battle of life which awaited him beyond the threshold of the snow.

Except for the vast alternations of storm and calm, of starlight and auroral radiance, there was nothing to happen in that empty and frozen world. Such life as dared the cold and dark in those regions kept along the edges of the sea, where the great waters kept air-holes open through the incumbent ice. Thither frequented the walrus and the seals, and there hunted stealthily the savage old he-bears, who were too restless to yield themselves to the long winter sleep. But the wise mother had wandered far into the inland solitudes before retiring for her winter of sleep and motherhood. Over the place of that safe sleep and secret motherhood no live thing passed, all winter long,—save once or twice a small white fox, who sniffed cautiously at a faint, menacing scent which stole up through the hard snow, and once or twice the wide, soundless wings of a great white Arctic owl, winnowing southward to find the vanished ptarmigan.