The Haunters & The Haunted Ghost Stories And Tales Of The Supernatural 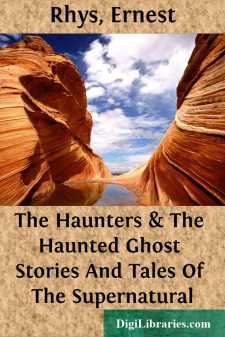 During the whole of a dull, dark, and soundless day in the autumn of the year, when the clouds hung oppressively low in the heavens, I had been passing alone, on horseback, through a singularly dreary tract of country; and at length found myself, as the shades of the evening drew on, within view of the melancholy House of Usher. I know not how it was—but, with the first glimpse of the building, a sense of insufferable gloom pervaded my spirit. I say insufferable; for the feeling was unrelieved by any of that half-pleasurable, because poetic, sentiment with which the mind usually receives even the sternest natural images of the desolate or terrible. I looked upon the scene before me—upon the mere house, and the simple landscape features of the domain—upon the bleak walls—upon the vacant eye-like windows—upon a few rank sedges—and upon a few white trunks of decayed trees—with an utter depression of soul which I can compare to no earthly sensation more properly than to the after-dream of the reveller upon opium—the bitter lapse into everyday life—the hideous dropping off of the veil. There was an iciness, a sinking, a sickening of the heart—an unredeemed dreariness of thought which no goading of the imagination could torture into aught of the sublime. What was it—I paused to think—what was it that so unnerved me in the contemplation of the House of Usher? It was a mystery all insoluble; nor could I grapple with the shadowy fancies that crowded upon me as I pondered. I was forced to fall back upon the unsatisfactory conclusion, that while, beyond doubt, there are combinations of very simple natural objects which have the power of thus affecting us, still the analysis of this power lies among considerations beyond our depth. It was possible, I reflected, that a mere different arrangement of the particulars of the scene, of the details of the picture, would be sufficient to modify, or perhaps to annihilate its capacity for sorrowful impression; and, acting upon this idea, I reined my horse to the precipitous brink of a black and lurid tarn that lay in unruffled lustre by the dwelling, and gazed down—but with a shudder even more thrilling than before—upon the remodelled and inverted images of the grey sedge, and the ghastly tree-stems, and the vacant and eye-like windows.

Nevertheless, in this mansion of gloom I now proposed to myself a sojourn of some weeks. Its proprietor, Roderick Usher, had been one of my boon companions in boyhood; but many years had elapsed since our last meeting. A letter, however, had lately reached me in a distant part of the country—a letter from him—which, in its wildly importunate nature, had admitted of no other than a personal reply. The MS. gave evidence of nervous agitation. The writer spoke of acute bodily illness—of a mental disorder which oppressed him—and of an earnest desire to see me, as his best, and indeed his only personal friend, with a view of attempting, by the cheerfulness of my society, some alleviation of his malady. It was the manner in which all this, and much more, was said—it was the apparent heart that went with his request—which allowed me no room for hesitation; and I accordingly obeyed forthwith what I still considered a very singular summons.

Although, as boys, we had been even intimate associates, yet I really knew little of my friend. His reserve had been always excessive and habitual. I was aware, however, that his very ancient family had been noted, time out of mind, for a peculiar sensibility of temperament, displaying itself, through long ages, in many works of exalted art, and manifested, of late, in repeated deeds of munificent yet unobtrusive charity, as well as in a passionate devotion to the intricacies, perhaps even more than to the orthodox and easily recognisable beauties, of musical science. I had learned, too, the very remarkable fact, that the stem of the Usher race, all time-honoured as it was, had put forth, at no period, any enduring branch; in other words, that the entire family lay in the direct line of descent, and had always, with very trifling and very temporary variation, so lain. It was this deficiency, I considered, while running over in thought the perfect keeping of the character of the premises with the accredited character of the people, and while speculating upon the possible influence which the one, in the long lapse of centuries, might have exercised upon the other—it was this deficiency, perhaps, of collateral issue, and the consequent undeviating transmission, from sire to son, of the patrimony with the name, which had, at length, so identified the two as to merge the original title of the estate in the quaint and equivocal appellation of the "House of Usher"—an appellation which seemed to include, in the minds of the peasantry who used it, both the family and the family mansion....