The Haunted Chamber A Novel 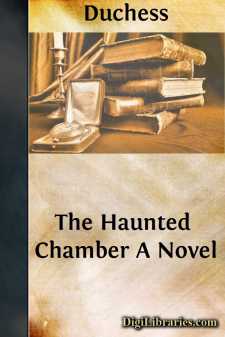 The sun has "dropped down," and the "day is dead." The silence and calm of coming night are over everything. The shadowy twilight lies softly on sleeping flowers and swaying boughs, on quiet fountains—the marble basins of which gleam snow-white in the uncertain light—on the glimpse of the distant ocean seen through the giant elms. A floating mist hangs in the still warm air, making heaven and earth mingle in one sweet confusion.

The ivy creeping up the ancient walls of the castle is rustling and whispering as the evening breeze sweeps over it. High up the tendrils climb, past mullioned windows and quaint devices, until they reach even to the old tower, and twine lovingly round it, and push through the long apertures in the masonry of the walls of the haunted chamber.

It is here that the shadows cast their heaviest gloom. All this corner of the old tower is wrapped in darkness, as though to obscure the scene of terrible crimes of past centuries.

Ghosts of dead-and-gone lords and ladies seem to peer out mysteriously from the openings in this quaint chamber, wherein no servant, male or female, of the castle has ever yet been known to set foot. It is full of dire horrors to them, and replete with legends of by-gone days and grewsome sights ghastly enough to make the stoutest heart quail.

In the days of the Stuarts an old earl had hanged himself in that room, rather than face the world with dishonor attached to his name; and earlier still a beauteous dame, fair but frail, had been incarcerated there, and slowly starved to death by her relentless lord. There was even in the last century a baronet—the earldom had been lost to the Dynecourts during the Commonwealth—who, having quarreled with his friend over a reigning belle, had smitten him across the cheek with his glove, and then challenged him to mortal combat. The duel had been fought in the luckless chamber, and had only ended with the death of both combatants; the blood stains upon the flooring were large and deep, and to this day the boards bear silent witness to the sanguinary character of that secret fight.

Just now, standing outside the castle in the warmth and softness of the dying daylight, one can hardly think of by-gone horrors, or aught that is sad and sinful.

There is an air of bustle and expectancy within-doors that betokens coming guests; the servants are moving to and fro noiselessly but busily, and now and then the stately housekeeper passes from room to room uttering commands and injunctions to the maids as she goes. No less occupied and anxious is the butler, as he surveys the work of the footmen. It is so long since the old place has had a resident master, and so much longer still since guests have been invited to it, that the household are more than ordinarily excited at the change now about to take place.

Sir Adrian Dynecourt, after a prolonged tour on the Continent and lingering visits to the East, has at last come home with the avowed intention of becoming a staid country gentleman, and of settling down to the cultivation of turnips, the breeding of prize oxen, and the determination to be the M.F.H. when old Lord Dartree shall have fulfilled his declared intention of retiring in his favor. He is a tall young man, lithe and active. His skin, though naturally fair, is bronzed by foreign travel. His hair is a light brown, cut very close to his head. His eyes are large, clear, and honest, and of a peculiarly dark violet; they are beautiful eyes, winning and sweet, and steady in their glance....