The Harlequinade An Excursion 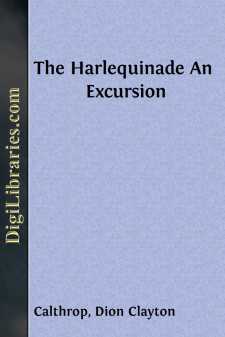 For some time now she has been sitting there. Miss Alice Whistler is an attractive young person of about fifteen (very readily still she tells her age), dressed in a silver grey frock which she wishes were longer. The frock has a white collar; she wears grey silk stockings and black shoes; and, finally, a little black silk apron, one of those French aprons. If you must know still more exactly how she is dressed, look at Whistler's portrait of Miss Alexander.

What happened was this. A pleasant old Victorian art fancier ( of) saw the child one day, and noted that her name was Whistler ("No relation," said her Uncle Edward, "so far as we know"), and "That's how to dress her," said he. And thereupon he forked out what he delicately called "The Wherewithal" ("Which sounded like a sort of mackintosh," said Alice afterwards), for they couldn't have afforded it themselves. "You're still young enough to take presents," said Uncle Edward. And indeed Alice was very pleased, and saw that the hem was left wide enough to let down several times. And here she is; the dress is kept for these occasions.

Here she is in a low little chair, sitting with her basket of knitting beside her on one side of a simply painted grey and black proscenium, across which, masking the little stage, blue curtains hang in folds. "The blue," said Miss Alice when she ordered them, "must be the colour of Blue-eyed Mary." The silly shopman did not know the flower. "Blue sky then," said Alice, "it's the blue that all skies seem to be when you're really happy under them." "Reckitt's blue is what you want," the shopman said, when nothing seemed to do. Yes; and a very good blue that is—by lamplight.

On the other side of the proscenium, ensconced (and the word was made to express just this)—ensconced in a porter's chair is Uncle Edward. It is an old porter's chair, for they seem not to make them nowadays. This one indeed was given to Uncle Edward by a club that had no further use for it, having cured the draughts in its front hall by puttin a patent door that the fat members stuck in and that tried to cut the thin members in half. A cross between a sentry-box and a cradle stuck on end it is, and very, very suitable to sit upright in and pretend you're not asleep. Years of that sitting in by porters, and of leaning against by under-porters and messengers who keep you awake with their chatter, and of daily dusting and rubbing, have made its leather uniform softly glow and its brass buttons shine till it looks a comfortable piece of furniture indeed. Now the side of a stage is draughty at the best of times, and Uncle Edward, says he, is by no means so young as he was (a real live joke to him that outworn phrase is), and how he managed before he had it he really cannot think!

However early you come to the performance you always find him there. For minutes and minutes you may only be aware of very shiny square-toed boots and black-trousered legs and a newspaper that hides the of him. On most days it will be "The Times", on Wednesday it may be "Punch", and on Saturdays "The Spectator." "That is a gentleman's reading," he says....