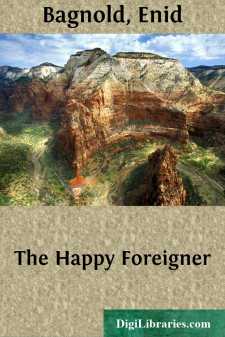 CHAPTER I THE TRAVELLER

The war had stopped.

The King of England was in Paris, and the President of the United States was hourly expected.

Humbler guests poured each night from the termini into the overflowing city, and sought anxiously for some bed, lounge-chair, or pillowed corner, in which to rest until the morning. Stretched upon the table in a branch of the Y.W.C.A. lay a young woman from England whose clothes were of brand-new khaki, and whose name was Fanny.

Just as she entered the station a small boy with a basket of violets for sale held a bunch to her face.

He pursued her and held it against her chin.

As she had neither slept on the boat from Southampton nor on the table of the Y.W.C.A., tears of pleasure came into her eyes as she took them. But while she dragged her heavy kitbag and her suitcase across the platform another boy of a different spirit ran beside her.

She continued to drag the weighty sack behind her over the platform."She didn't know!" howled the wicked boy. "No one had told her!"

And in the train which carried her towards the dead of night the taunt and the violets accompanied her.

At half-past two in the morning she reached the station of Bar-le-Duc. The rain rattled down through the broken roof as she crossed the lines of the platform on the further side, where, vaguely expecting to be met she questioned civilians and military police. But the pall of death that hung over Bar stretched even to the station, where nobody knew anything, expected anything, cared anything, except to hurry out and away into the rain.

She, too, followed at last, leaving her bag and box in the corner of a deserted office, and crossing the station yard tramped out in the thick mud on to a bridge. The rain was falling in torrents, and crouching for a minute in a doorway she made her bundles faster and buttoned up her coat. Roofs jutted above her, pavements sounded under her feet, the clock struck three near by. If there was an hotel anywhere there was no one to give information about it. The last train had emptied itself, the travellers had hurried off into the night, and not a foot rang upon the pavements. The rain ran in a stream down her cap and on to her face; down her sleeves and on to her hands.

A light further up the street attracted her attention, and walking towards it she found that it came from an open doorway above which she could make out the letters "Y.M.C.A."

She did not know with what complicated feelings she would come to regard these letters—with what gratitude mixed with irritation, self-reproach with greed.

Climbing the steps she looked inside. The hall of the building was paved with stone, and on a couple of dozen summer chairs of cane sat as many American officers, dozing in painful attitudes of unrest....