The Hall of Fantasy (From "Mosses from an Old Manse") 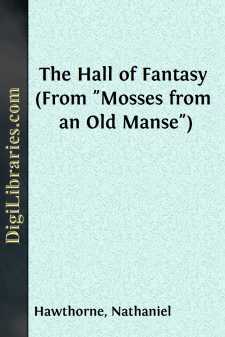 It has happened to me, on various occasions, to find myself in a certain edifice which would appear to have some of the characteristics of a public exchange. Its interior is a spacious hall, with a pavement of white marble. Overhead is a lofty dome, supported by long rows of pillars of fantastic architecture, the idea of which was probably taken from the Moorish ruins of the Alhambra, or perhaps from some enchanted edifice in the Arabian tales. The windows of this hall have a breadth and grandeur of design and an elaborateness of workmanship that have nowhere been equalled, except in the Gothic cathedrals of the Old World. Like their prototypes, too, they admit the light of heaven only through stained and pictured glass, thus filling the hall with many-colored radiance and painting its marble floor with beautiful or grotesque designs; so that its inmates breathe, as it were, a visionary atmosphere, and tread upon the fantasies of poetic minds. These peculiarities, combining a wilder mixture of styles than even an American architect usually recognizes as allowable,—Grecian, Gothic, Oriental, and nondescript,—cause the whole edifice to give the impression of a dream, which might be dissipated and shattered to fragments by merely stamping the foot upon the pavement. Yet, with such modifications and repairs as successive ages demand, the Hall of Fantasy is likely to endure longer than the most substantial structure that ever cumbered the earth.

It is not at all times that one can gain admittance into this edifice, although most persons enter it at some period or other of their lives; if not in their waking moments, then by the universal passport of a dream. At my last visit I wandered thither unawares while my mind was busy with an idle tale, and was startled by the throng of people who seemed suddenly to rise up around me.

"Bless me! Where am I?" cried I, with but a dim recognition of the place.

"You are in a spot," said a friend who chanced to be near at hand, "which occupies in the world of fancy the same position which the Bourse, the Rialto, and the Exchange do in the commercial world. All who have affairs in that mystic region, which lies above, below, or beyond the actual, may here meet and talk over the business of their dreams."

"Yes," he replied. "Yet we see but a small portion of the edifice. In its upper stories are said to be apartments where the inhabitants of earth may hold converse with those of the moon; and beneath our feet are gloomy cells, which communicate with the infernal regions, and where monsters and chimeras are kept in confinement and fed with all unwholesomeness."

In niches and on pedestals around about the hall stood the statues or busts of men who in every age have been rulers and demigods in the realms of imagination and its kindred regions. The grand old countenance of Homer; the shrunken and decrepit form but vivid face of AEsop; the dark presence of Dante; the wild Ariosto; Rabelais's smile of deep-wrought mirth, the profound, pathetic humor of Cervantes; the all-glorious Shakespeare; Spenser, meet guest for an allegoric structure; the severe divinity of Milton; and Bunyan, moulded of homeliest clay, but instinct with celestial fire,—were those that chiefly attracted my eye. Fielding, Richardson, and Scott occupied conspicuous pedestals. In an obscure and shadowy niche was deposited the bust of our countryman, the author of Arthur Mervyn.

"Besides these indestructible memorials of real genius," remarked my companion, "each century has erected statues of its own ephemeral favorites in wood."

"I observe a few crumbling relics of such," said I. "But ever and anon, I suppose, Oblivion comes with her huge broom and sweeps them all from the marble floor. But such will never be the fate of this fine statue of Goethe."

"Nor of that next to it,—Emanuel Swedenborg," said he. "Were ever two men of transcendent imagination more unlike?"

In the centre of the hall springs an ornamental fountain, the water of which continually throws itself into new shapes and snatches the most diversified lines from the stained atmosphere around. It is impossible to conceive what a strange vivacity is imparted to the scene by the magic dance of this fountain, with its endless transformations, in which the imaginative beholder may discern what form he will. The water is supposed by some to flow from the same source as the Castalian spring, and is extolled by others as uniting the virtues of the Fountain of Youth with those of many other enchanted wells long celebrated in tale and song....