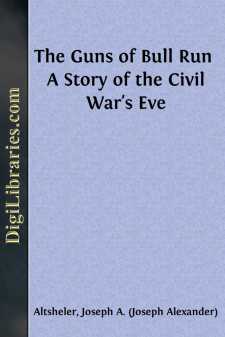 CHAPTER I NEWS FROM CHARLESTON

It would soon be Christmas and Harry Kenton, at his desk in the Pendleton Academy, saw the snow falling heavily outside. The school stood on the skirt of the town, and the forest came down to the edge of the playing field. The great trees, oak and ash and elm, were clothed in white, and they stood out a vast and glittering tracery against the somber sky.

The desk was of the old kind, intended for two, and Harry's comrade in it was his cousin, Dick Mason, of his own years and size. They would graduate in June, and both were large and powerful for their age. There was a strong family resemblance and yet a difference. Harry's face was the more sensitive and at times the blood leaped like quicksilver in his veins. Dick's features indicated a quieter and more stubborn temper. They were equal favorites with teachers and pupils.

Dick's eyes followed Harry's, and he, too, looked at the falling snow and the white forest. Both were thinking of Christmas and the holiday season so near at hand. It was a rich section of Kentucky, and they were the sons of prosperous parents. The snow was fitting at such a time, and many joyous hours would be passed before they returned to school.

The clouds darkened and the snow fell faster. A wind rose and drove it against the panes. The boys heard the blast roaring outside and the comfort of the warm room was heightened by the contrast. Harry's eyes turned reluctantly back to his Tacitus and the customs and manners of the ancient Germans. The curriculum of the Pendleton Academy was simple, like most others at that time. After the primary grades it consisted chiefly of the classics and mathematics. Harry led in the classics and Dick in the mathematics.

Bob Turner, the free colored man, who was janitor of the academy, brought in the morning mail, a dozen letters and three or four newspapers, gave it to Dr. Russell and withdrew on silent feet.

The Doctor was principal of Pendleton Academy, and he always presided over the room in which sat the larger boys, nearly fifty in number. His desk and chair were on a low dais and he sat facing the pupils. He was a large man, with a ruddy face, and thick hair as white as the snow that was falling outside. He had been a teacher fifty years, and three generations in Pendleton owed to him most of the learning that is obtained from books. He opened his letters one by one, and read them slowly.

Harry moved far away into the German forest with old Tacitus. He was proud of his Latin and he did not mean to lose his place as first in the class. The other boys also were absorbed in their books. It was seldom that all were studious at the same time, but this was one of the rare moments. There was no shuffling of feet, and fifty heads were bent over their desks.

It was a full half hour before Harry looked up from his Tacitus. His first glance was at the window. The snow was driving hard, and the forest had become a white blur. He looked next at the Doctor and he saw that the ruddy face had turned white....