The Guests Of Hercules 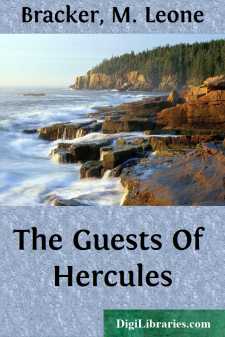 THE GUESTS OF HERCULES

Long shadows of late afternoon lay straight and thin across the garden path; shadows of beech trees that ranged themselves in an undeviating line, like an inner wall within the convent wall of brick; and the soaring trees were very old, as old perhaps as the convent itself, whose stone had the same soft tints of faded red and brown as the autumn leaves which sparsely jewelled the beeches' silver.

A tall girl in the habit of a novice walked the path alone, moving slowly across the stripes of sunlight and shadow which inlaid the gravel with equal bars of black and reddish gold. There was a smell of autumn on the windless air, bitter yet sweet; the scent of dying leaves, and fading flowers loth to perish, of rose-berries that had usurped the place of roses, of chrysanthemums chilled by frost, of moist earth deprived of sun, and of the green moss-like film overgrowing all the trunks of the old beech trees. The novice was saying goodbye to the convent garden, and the long straight path under the wall, where every day for many years she had walked, spring and summer, autumn and winter; days of rain, days of sun, days of boisterous wind, days of white feathery snow—all the days through which she had passed, on her way from childhood to womanhood. Best of all, she had loved the garden and her favourite path in spring, when vague hopes like dreams stirred in her blood, when it seemed that she could hear the whisper of the sap in the veins of the trees, and the crisp stir of the buds as they unfolded. She wished that she could have been going out of the garden in the brightness and fragrance of spring. The young beauty of the world would have been a good omen for the happiness of her new life. The sorrowful incense of Nature in decay cast a spell of sadness over her, even of fear, lest after all she were doing a wrong thing, making a mistake which could never be amended.

The spirit of the past laid a hand upon her heart. Ghosts of sweet days gone long ago beckoned her back to the land of vanished hours. The garden was the garden of the past; for here, within the high walls draped in flowering creepers and ivy old as history, past, present, and future were all as one, and had been so for many a tranquil generation of calm-faced, dark-veiled women. Suddenly a great homesickness fell upon the novice like an iron weight. She longed to rush into the house, to fling herself at Reverend Mother's feet, and cry out that she wanted to take back her decision, that she wanted everything to be as it had been before. But it was too late to change. What was done, was done.

Deliberately, she had given up her home, and all the kind women who had made the place home for her, from the time when she was a child eight years old until now, when she was twenty-four. Sixteen years! It was a lifetime. Memories of her child-world before convent days were more like dreams than memories of real things that had befallen her, Mary Grant. And yet, on this her last day in the convent, recollections of the first were crystal clear, as they never had been in the years that lay between....