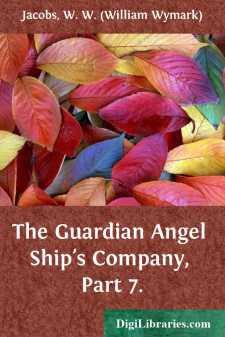 The night-watchman shook his head. "I never met any of these phil— philantherpists, as you call 'em," he said, decidedly. "If I 'ad they wouldn't 'ave got away from me in a hurry, I can tell you. I don't say I don't believe in 'em; I only say I never met any of 'em. If people do you a kindness it's generally because they want to get something out of you; same as a man once—a perfick stranger—wot stood me eight 'arf-pints becos I reminded 'im of his dead brother, and then borrered five bob off of me.

"O' course, there must be some kind-'arted people in the world—all men who get married must 'ave a soft spot somewhere, if it's only in the 'ead—but they don't often give things away. Kind-'artedness is often only another name for artfulness, same as Sam Small's kindness to Ginger Dick and Peter Russet.

"It started with a row. They was just back from a v'y'ge and 'ad taken a nice room together in Wapping, and for the fust day or two, wot with 'aving plenty o' money to spend and nothing to do, they was like three brothers. Then, in a little, old-fashioned public-'ouse down Poplar way, one night they fell out over a little joke Ginger played on Sam.

"It was the fust drink that evening, and Sam 'ad just ordered a pot o' beer and three glasses, when Ginger winked at the landlord and offered to bet Sam a level 'arf-dollar that 'e wouldn't drink off that pot o' beer without taking breath. The landlord held the money, and old Sam, with a 'appy smile on 'is face, 'ad just taken up the mug, when he noticed the odd way in which they was all watching him. Twice he took the mug up and put it down agin without starting and asked 'em wot the little game was, but they on'y laughed. He took it up the third time and started, and he 'ad just got about 'arf-way through when Ginger turns to the landlord and ses—

"Pore Sam started as though he 'ad been shot, and, arter getting rid of the beer in 'is mouth, stood there 'olding the mug away from 'im and making such 'orrible faces that they was a'most frightened.

"'Wot's the matter with him? I've never seen 'im carry on like that over a drop of beer before,' ses Ginger, staring.

"'Not with a dead mouse in it,' ses Sam, trembling with passion.

"'Mouse?' ses Ginger, innercent-like. 'Mouse? Why, I didn't say it was in your beer, Sam. Wotever put that into your 'ead?'

"'And made you lose your bet,' ses Peter.

"Then old Sam see 'ow he'd been done, and the way he carried on when the landlord gave Ginger the 'arf-dollar, and said it was won fair and honest, was a disgrace. He 'opped about that bar 'arf crazy, until at last the landlord and 'is brother, and a couple o' soldiers, and a helpless cripple wot wos selling matches, put 'im outside and told 'im to stop there.

"He stopped there till Ginger and Peter came out, and then, drawing 'imself up in a proud way, he told 'em their characters and wot he thought about 'em....