The Grim Smile of the Five Towns 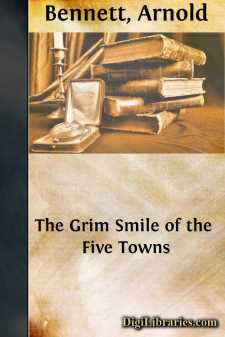 In the Five Towns the following history is related by those who know it as something side-splittingly funny—as one of the best jokes that ever occurred in a district devoted to jokes. And I, too, have hitherto regarded it as such. But upon my soul, now that I come to write it down, it strikes me as being, after all, a pretty grim tragedy. However, you shall judge, and laugh or cry as you please.

It began in the little house of Mrs Carpole, up at Bleakridge, on the hill between Bursley and Hanbridge. Mrs Carpole was the second Mrs Carpole, and her husband was dead. She had a stepson, Horace, and a son of her own, Sidney. Horace is the hero, or the villain, of the history. On the day when the unfortunate affair began he was nineteen years old, and a model youth. Not only was he getting on in business, not only did he give half his evenings to the study of the chemistry of pottery and the other half to various secretaryships in connection with the Wesleyan Methodist Chapel and Sunday-school, not only did he save money, not only was he a comfort to his stepmother and a sort of uncle to Sidney, not only was he an early riser, a total abstainer, a non-smoker, and a good listener; but, in addition to the practice of these manifold and rare virtues, he found time, even at that tender age, to pay his tailor's bill promptly and to fold his trousers in the same crease every night—so that he always looked neat and dignified. Strange to say, he made no friends. Perhaps he was just a thought too perfect for a district like the Five Towns; a sin or so might have endeared him to the entire neighbourhood. Perhaps his loneliness was due to his imperfect sense of humour, or perhaps to the dull, unsmiling heaviness of his somewhat flat features.

Sidney was quite a different story. Sidney, to use his mother's phrase, was a little jockey. His years were then eight. Fair-haired and blue-eyed, as most little jockeys are, he had a smile and a scowl that were equally effective in tyrannizing over both his mother and Horace, and he was beloved by everybody. Women turned to look at him in the street. Unhappily, his health was not good. He was afflicted by a slight deafness, which, however, the doctor said he would grow out of; the doctor predicted for him a lusty manhood. In the meantime, he caught every disease that happened to be about, and nearly died of each one. His latest acquisition had been scarlet fever. Now one afternoon, after he had 'peeled' and his room had been disinfected, and he was beginning to walk again, Horace came home and decided that Sidney should be brought downstairs for tea as a treat, to celebrate his convalescence, and that he, Horace, would carry him downstairs. Mrs Carpole was delighted with the idea, and Sidney also, except that Sidney did not want to be carried downstairs—he wanted to walk down.

'I think it will be better for him to walk, Horace dear,' said Mrs Carpole, in her thin, plaintive voice. 'He can, quite well. And you know how clumsy you are....