The Great War As I Saw It 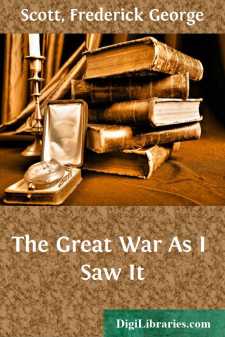 It is with great pleasure I accede to the request of Canon Scott to write a foreword to his book.

I first heard of my friend and comrade after the second battle of Ypres when he accompanied his beloved Canadians to Bethune after their glorious stand in that poisonous gap—which in my own mind he immortalised in verse:—

O England of our fathers, and England of our sons,Above the roar of battling hosts, the thunder of the guns,A mother's voice was calling us, we heard it oversea,The blood which thou didst give us, is the blood we spill for thee.

Little did I think when I first saw him that he could possibly, at his time of life, bear the rough and tumble of the heaviest fighting in history, and come through with buoyancy of spirit younger men envied and older men recognized as the sign and fruit of self-forgetfulness and the inspiration and cheering of others.

Always in the thick of the fighting, bearing almost a charmed life, ignoring any suggestion that he should be posted to a softer job "further back," he held on to the very end.

The last time I saw him was in a hospital at Etaples badly wounded, yet cheery as ever—having done his duty nobly.

All the Canadians in France knew him, and his devotion and fearlessness were known all along the line, and his poems will, I am bold to prophesy, last longer in the ages to come than most of the histories of the war.

I feel sure that his book—if anything like himself—will interest and inspire all who read it.

It is with a feeling of great hesitation that I send out this account of my personal experiences in the Great War. As I read it over, I am dismayed at finding how feebly it suggests the bitterness and the greatness of the sacrifice of our men. As the book is written from an entirely personal point of view, the use of the first personal pronoun is of course inevitable, but I trust that the narration of my experience has been used only as a lens through which the great and glorious deeds of our men may be seen by others. I have refrained, as far as possible, except where circumstances seemed to demand it, from mentioning the names of officers or the numbers of battalions.

I cannot let the book go out without thanking, for many acts of kindness, Lieut.-General Sir Edwin Alderson, K.C.B., Lieut.-General Sir Arthur Currie, G.C.M.G., K.C.B., and Major-General Sir Archibald Macdonell, K.C.B., C.M.G., D.S.O., who were each in turn Commanders of the First Canadian Division. In all the efforts the chaplains made for the welfare of the Division, they always had the backing of these true Christian Knights. Their kindness and consideration at all times were unbounded, and the degree of liberty which they allowed me was a privilege for which I cannot be too thankful, and which I trust I did not abuse.

If, by these faulty and inadequate reminiscences, dug out of memories which have blended together in emotions too deep and indefinable to be expressed in words, I have reproduced something of the atmosphere in which our glorious men played their part in the deliverance of the world, I shall consider my task not in vain....