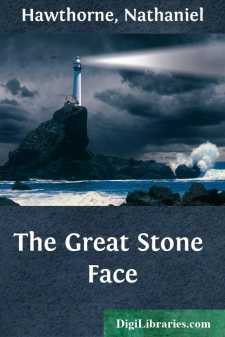 THE first three numbers in this collection are tales of the White Hills in New Hampshire. The passages from Sketches from Memory show that Hawthorne had visited the mountains in one of his occasional rambles from home, but there are no entries in his Note Books which give accounts of such a visit. There is, however, among these notes the following interesting paragraph, written in 1840 and clearly foreshadowing The Great Stone Face:

'The semblance of a human face to be formed on the side of a mountain, or in the fracture of a small stone, by a lusus naturae [freak of nature]. The face is an object of curiosity for years or centuries, and by and by a boy is born whose features gradually assume the aspect of that portrait. At some critical juncture the resemblance is found to be perfect. A prophecy may be connected.'

It is not impossible that this conceit occurred to Hawthorne before he had himself seen the Old Man of the Mountain, or the Profile, in the Franconia Notch which is generally associated in the minds of readers with The Great Stone Face.

In The Ambitious Guest he has made use of the incident still told to travellers through the Notch, of the destruction of the Willey family in August, 1826. The house occupied by the family was on the slope of a mountain, and after a long drought there was a terrible tempest which not only raised the river to a great height but loosened the surface of the mountain so that a great landslide took place. The house was in the track of the slide, and the family rushed out of doors. Had they remained within they would have been safe, for a ledge above the house parted the avalanche so that it was diverted into two paths and swept past the house on either side. Mr. and Mrs. Willey, their five children, and two hired men were crushed under the weight of earth, rocks, and trees.

In the Sketches from Memory Hawthorne gives an intimation of the tale which he might write and did afterward write of The Great Carbuncle. The paper is interesting as showing what were the actual experiences out of which he formed his imaginative stories.

One afternoon, when the sun was going down, a mother and her little boy sat at the door of their cottage, talking about the Great Stone Face. They had but to lift their eyes, and there it was plainly to be seen, though miles away, with the sunshine brightening all its features. And what was the Great Stone Face? Embosomed amongst a family of lofty mountains, there was a valley so spacious that it contained many thousand inhabitants. Some of these good people dwelt in log-huts, with the black forest all around them, on the steep and difficult hillsides. Others had their homes in comfortable farm-houses, and cultivated the rich soil on the gentle slopes or level surfaces of the valley. Others, again, were congregated into populous villages, where some wild, highland rivulet, tumbling down from its birthplace in the upper mountain region, had been caught and tamed by human cunning, and compelled to turn the machinery of cotton-factories....