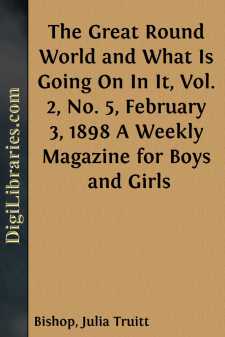 As we go to press there is an uncertain feeling resulting from the departure of our cruiser for Cuban waters. It may provoke a crisis, or it may lead to a better knowledge of the true attitude of the administration toward Spain.

Cuba continues to furnish us with its share of current history; the news is no more encouraging than that of previous weeks, however.

In the East the situation has not materially changed. It continues interesting—so interesting that this subject is uppermost in the minds of the civilized world. While any day may witness the peaceful settlement of the whole trouble, it is by no means certain but that selfish motives of one of the Great Powers may, at any minute, cause a general European war.

England's attention is divided between China and Egypt. The Indian and Chinese questions bid fair to be merged, as there are indications that England's attitude toward China is not an unselfish one.

In France the Dreyfus clamor has grown to a disturbance, the disturbance to riot;—what next?

The short sketch of the life of Gladstone which will be published in next week's number should interest all of our readers. The "Grand Old Man" is undoubtedly the grandest figure in the history of the century now closing, and his admirers are to be found in every part of the world—many in our own country, where self-achieved greatness is by no means uncommon. His has been a life of constant, unremitted labor in the advancement of the interests of his fellow-men. No minute in his long life seems to have been wasted, and to-day, when nearly ninety years of age, he continues to labor to the utmost of his remaining strength.

Our Naturalist has already received enough suggestions for his projected book to enable him to write a library, we think, but he says that he is quite in earnest in wanting to hear from many thousand boys and girls on this subject. His purpose is apparently to make a book which shall be found just right by all.

A batch of letters comes in from Baltimore, and the subjects are so varied and interesting that we give them in outline.

Jane H. wants to know about the mongoose: what kind of snakes it kills; about sun-spots and their influence on the seasons.

Edwin St. J. G. about horses, especially those with long manes and tails.

Claude E. H. about Mother Carey's chickens. He writes that his uncle shot one while crossing the ocean.

Murray W. T. about birds and plants, "with pictures."

Howell G. about the quail, woodpecker, and other birds. (We wonder if he has seen Grant's book on birds, or "Bird Neighbors"?)

James M. about sea-lions and wild animals; also about cats and domestic animals.

Tom T. about the horse, dog, and python.

You can see by the above letters—and this was but part of one mail—how many things our young people want to know about, and what a task "Naturalist" has taken upon himself.

From Sterling, Ill., comes a request from a number of boys and girls for a book about wild animals and how they live. (Ingersoll's "Wild Neighbors" is just such a book.)