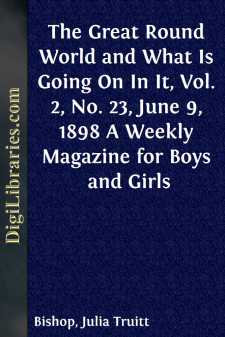 A Song of Life By MARGARET W. MORLEY. With illustrationsof flowers, fishes, frogs, birds, etc., set in the text.12mo, $1.25.

"It describes with artistic delicacy the transmission of that wonderful thing called life in both the plant and animal existence. The difficult subject is treated with such intelligence and charm of manner that children may read it with interest, and parents need have no fear of its influence."—The Chicago Times.

"Something of flower life, something of fish life, of frogs, and of birds, and a chapter on human life, form the subjects of this book,—all told in the graceful manner of a womanly woman, whose love for nature has given her a keener insight into nature's secrets, and a greater ability to impart those secrets to others with the ease of face-to-face talks than is vouchsafed to many people."—The Boston Times.

"Four True Stories of Life and Adventure," by Jessie R. Smith. This is a book to be read by children, not to them. A child during the years of seven and nine is usually hungering for true stories, and some mothers and teachers try to meet the demand by reading and telling "true" stories to them. This is well and good, but it is clear that if this inborn craving could be met by books framed in language of such limited vocabulary and construction that so young a child would constantly be invited to the story, how valuable it would be. This book is designated to meet this end. Less than 750 different words are used in the entire series, and these, excepting the necessary geographical names, are all in the commonest use among children. The stories are of Columbus, Captain John Smith, Miles Standish, Benjamin Franklin. Mothers and teachers with children of from seven to nine years of age will give this book a hearty welcome—the teachers because the market supply is so painfully deficient in this line, and the mothers because it will so admirably solve the oft-repeated query of "Mother, what can I do next?" It is so well gotten out and still so cheap that it should have a large sale.—Mother's Journal, March, 1898.

To hold loose numbers of the current part of The Great Round World—preventing them from being lost, getting soiled, or scattered. May be had in green, red, or blue cloth. Price, 35 Cents.

ADDRESSGreat Round World Publishing Co.5 WEST 18TH STREET, NEW YORK.   THE LIVING METHOD FOR LEARNING How to Think in French The most successful means yet devised for learningand teaching how to SPEAK FRENCH....
Show more
Show less