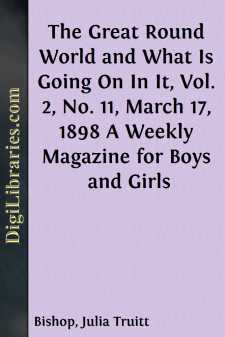 Spain and the Cuban situation continue to form the great centres of interest in this week's news. With the continuation of active preparations on the part of the United States and Spain, the crisis seems to be rapidly approaching. It is to be hoped that each will succeed in making itself so strong that war may be averted because of its probable magnitude. The presence of two strong fleets, opposed to each other, on the high seas could not but prove a menace to the interests of other nations; the prospect of this may of itself lead to a peaceful conclusion through the intervention of some one of the great powers. War seems a glorious thing to those who have not known its horrors; to experience it is quite another thing. In any event it would mean to many loss of fathers or brothers, destruction of property, paralysis of business—and all for what? That some point might be attained, some pride gratified, some enemy humbled—results as easily accomplished by arbitration the great blessing of the century. We may not ourselves be able to do anything to avert war. Each of us, however, can do his share toward creating a sentiment in favor of peace, and thus overcome the effect of the mischief-makers who, crying war at the top of their lungs now, will be the first to shirk duty if we have to fight.

We take pleasure in announcing that the publication of "The Great Round World, and the People Who Lived on It," by Mme. Z. A. Ragozin, the first numbers of which appeared in The Great Round World some months ago, will be continued shortly. Serious illness of the author has until this time interfered with its continuation.

Our new premium catalogue which was announced several weeks ago will be mailed with No. 73 of The Great Round World, for March 31st. Every subscriber will get a copy. Others can have it on application.

We have received the following very interesting letter from the City of Mexico:

I read in one of last July's numbers of The Great Round World a request for further information about the Empress Carlotta or the Emperor Maximilian.

We have a little summer home in the same town of Cuernavaca where they had their residence.

I don't wonder that they chose it for a summer home, it is such a beautiful spot and the climate perfection. It is fifty miles in air-line from the City of Mexico.

Their residence in Cuernavaca was an old place called "Jardin de la Borda." The house is of no importance, but the garden is one of the beautiful sights of Mexico; though now in a state of ruin, it is all fountains, terraces, lakes, flowers, and trees.

The Emperor also had his shooting-lodge about three miles out, with a small house on the grounds. Madame D—— (who was maid of honor to the Empress) told my mother that it was used simply as a resting-place for the huntsmen and a place of picnicking by the court. It is called "Casa del Campo." It is also in a ruinous state, is rented for $100 per year silver, and is used as a kind of beer-garden.

About ten miles from the town of Cuernavaca there is the magnificent hacienda of Atlascomulco, originally owned by Hernan Cortez. The greater portion of the building stands as Cortez left it, the walls being in many places five feet thick.

In the orchard attached is a small one-story house where Maximilian spent many hours of his stay at Cuernavaca; and there in a small room he signed the famous "Banda Negra" (Black Decree) which caused him to be so hated and which hastened his fall.

There are still to be seen the table, chair, and pen said to have been used by Maximilian when he signed the Black Decree.     John R. D., Jr.

From Germany we have received a most interesting little publication for our girls, and also a most valuable chart which will interest their elders.

"Fuer fleissige Kinderhaende. Anleitung und Muster fuer Bekleidung einer Puppe. Von Julie Lutz, Lehrerin der Frauenarbeitsschule, Heilbronn," is the title of the former. We hope to see an English edition of this some time soon, for many of our readers may not find German so easy to understand. However, even though this has the directions in German, it will be very much appreciated by all.

It consists of a good strong portfolio, or case, containing a number of patterns for doll clothes, printed on heavy strong paper, so that they may be cut out and used over and over again....