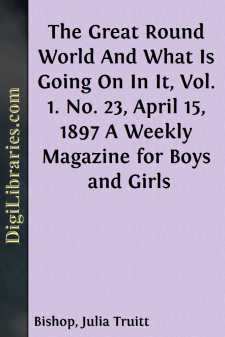 It is said that the unfortunate Princess Charlotte of Belgium is to be taken over to Mexico, in the hope that a visit to the scenes of her former happiness may restore her reason.

Her story brings back to memory a very sad and interesting page of our modern history.

Princess Charlotte, the daughter of Leopold I., King of the Belgians, was the most accomplished and beautiful princess of her time. She was the only daughter of the king. While she was still quite young he found she had a great talent for statecraft, and so he had her admitted to all the councils of state, and from her earliest childhood she was familiar with the ways and arts of diplomacy.

A brilliant future was expected for her, but when she was seventeen she married, for love, the young Archduke Maximilian, brother of the Emperor of Austria.

There was no expectation that Maximilian would ever come to a throne, and so it seemed as if the young princess' talents were to be thrown away when she settled down with her husband, and became the happiest young wife in Europe.

For seven years these two young folks were a model happy couple; then, one fatal day, Napoleon III. of France offered Maximilian the crown of Mexico.

Europe thought that Mexico needed a wise and clever ruler to straighten out the tangle into which its affairs had fallen, and it was supposed that Maximilian, backed by his beautiful and clever wife, would be just the man for the post. As Mexican affairs were in a very turbulent state, Napoleon promised Maximilian that he would keep a number of French troops in the country, and support him with an armed force, until the people of Mexico had learned to love and trust him, and he could rule them without danger.

Under these conditions Maximilian accepted, and the young couple became Emperor and Empress of Mexico, and, setting forth to their new land, bade farewell to Europe and happiness.

At that time Mexico was in the most terrible condition, as you will understand when you learn that within a period of forty-seven years there were three hundred revolutions, some successful, some the reverse. During this time the government was changed ten times, and over fifty persons succeeded each other as presidents, dictators, and emperors.

The throne of such an uneasy kingdom as this was by no means a pleasant one to occupy.

During these frequent revolutions it is easy to understand that many treaties were broken, and much property was seized.

The foreign residents in particular found Mexico a dangerous country to live in, and within a few years Spain, England, and France were making heavy claims against the country for damage done to their citizens.

The claims of England and Spain were satisfied, and they withdrew the troops they had sent to Mexico to enforce their demands.

France, however, could get no satisfaction, and so she remained, and carried on war against the Mexicans until she succeeded in getting a little the best of them.

It was at this moment that Louis Napoleon made up his mind that an Emperor was what Mexico needed, and sent out the unfortunate Archduke Maximilian to rule a wild, boisterous, and only half-conquered people.

The Mexicans, ever pleased with a change, welcomed the Emperor very kindly; the beauty and charity of the Empress made many friends for her, and for a time all went well....