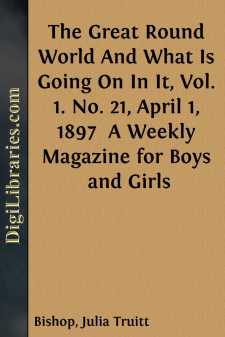 Greece is certainly the most daring little kingdom!

Far from being alarmed by the message sent her from the Powers, she has replied that it is impossible for her to withdraw her troops from Crete. She states that her object in sending them there was to restore peace, and as serious troubles still exist in the island, she cannot comply with the request of the Powers.

In the reply, she further states that she cannot consent to Home Rule for Crete under the direction of Turkey, but is willing to leave it to the Cretans themselves to decide under the rule of what monarch they wish to be.

The Powers are surprised and angry that Greece should dare to disagree with them; but the reply has been written in such a careful manner that it is not an open defiance of their wishes. They cannot therefore send the second note of which we spoke in our last number, but have had to call for a fresh discussion of the matter.

The general idea is that the reply of Greece is very clever, and that it may be the means of preventing a war, because it is so reasonable in its tone that Europe cannot find in it an excuse for getting angry enough to declare war.

The reply of Greece opens a way for further discussion, which may lead to a settlement.

There is a good deal of sly diplomacy under this soft answer.

The great combination which is called the Powers, consists of six nations: Germany, France, Italy, Russia, Austria, and Great Britain. It is necessary for these six nations to agree before any action can be taken by them. As a matter of fact, they are very far from agreeing. Greece, it seems, is well aware of this, and relies on it to help her get her own way in the end.

To begin with, France has sent word that she cannot possibly take part in any severe measures against Greece, while public opinion remains as it is in France. She would be glad to act with the Powers, but dares not do so in the face of the opposition of the French Parliament.

England would gladly take the same stand. She is, however, unable to do so, because the rest of the Powers are now suspecting her of having stirred up the Cretan trouble, and so she has to appear severe to show that she is in earnest in trying to prevent war between Greece and Turkey. It is known that she is unwilling to support Turkey against Greece, and that the Queen is taking an active part in the Greek question, and restraining her ministers from taking severe measures with Greece.

On the other hand, it is reported that the German Emperor only joined the rest of the nations on the understanding that his advice should be followed. He suggested that the Powers should first blockade the Piræus, which is the great port of Greece, at the head of which lies the city of Athens. Having arranged the blockade, the Powers were then to send a final message to Greece, ordering her to withdraw from Crete, and if she refused, were to proceed to bombard Athens.

This gentle advice not being followed, the German Emperor became highly insulted, threatened to withdraw from the alliance, declared himself no longer in sympathy with it, and had to be coaxed and flattered till he grew amiable again....