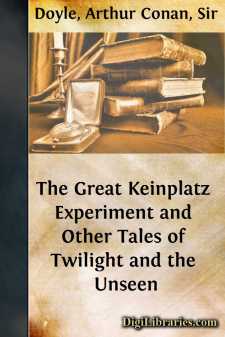 Every one knows that Sir Dominick Holden, the famous Indian surgeon, made me his heir, and that his death changed me in an hour from a hard-working and impecunious medical man to a well-to-do landed proprietor. Many know also that there were at least five people between the inheritance and me, and that Sir Dominick's selection appeared to be altogether arbitrary and whimsical. I can assure them, however, that they are quite mistaken, and that, although I only knew Sir Dominick in the closing years of his life, there were none the less very real reasons why he should show his goodwill towards me. As a matter of fact, though I say it myself, no man ever did more for another than I did for my Indian uncle. I cannot expect the story to be believed, but it is so singular that I should feel that it was a breach of duty if I did not put it upon record—so here it is, and your belief or incredulity is your own affair.

Sir Dominick Holden, C.B., K.C.S.I., and I don't know what besides, was the most distinguished Indian surgeon of his day. In the Army originally, he afterwards settled down into civil practice in Bombay, and visited as a consultant every part of India. His name is best remembered in connection with the Oriental Hospital, which he founded and supported. The time came, however, when his iron constitution began to show signs of the long strain to which he had subjected it, and his brother practitioners (who were not, perhaps, entirely disinterested upon the point) were unanimous in recommending him to return to England. He held on so long as he could, but at last he developed nervous symptoms of a very pronounced character, and so came back, a broken man, to his native county of Wiltshire. He bought a considerable estate with an ancient manor-house upon the edge of Salisbury Plain, and devoted his old age to the study of Comparative Pathology, which had been his learned hobby all his life, and in which he was a foremost authority.

We of the family were, as may be imagined, much excited by the news of the return of this rich and childless uncle to England. On his part, although by no means exuberant in his hospitality, he showed some sense of his duty to his relations, and each of us in turn had an invitation to visit him. From the accounts of my cousins it appeared to be a melancholy business, and it was with mixed feelings that I at last received my own summons to appear at Rodenhurst. My wife was so carefully excluded in the invitation that my first impulse was to refuse it, but the interests of the children had to be considered, and so, with her consent, I set out one October afternoon upon my visit to Wiltshire, with little thought of what that visit was to entail.

My uncle's estate was situated where the arable land of the plains begins to swell upwards into the rounded chalk hills which are characteristic of the county. As I drove from Dinton Station in the waning light of that autumn day, I was impressed by the weird nature of the scenery....