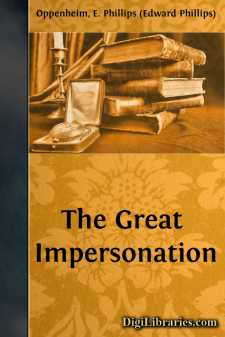 The trouble from which great events were to come began when Everard Dominey, who had been fighting his way through the scrub for the last three quarters of an hour towards those thin, spiral wisps of smoke, urged his pony to a last despairing effort and came crashing through the great oleander shrub to pitch forward on his head in the little clearing. It developed the next morning, when he found himself for the first time for many months on the truckle bed, between linen sheets, with a cool, bamboo-twisted roof between him and the relentless sun. He raised himself a little in the bed.

"Where the mischief am I?" he demanded.

A black boy, seated cross-legged in the entrance of the banda, rose to his feet, mumbled something and disappeared. In a few moments the tall, slim figure of a European, in spotless white riding clothes, stooped down and came over to Dominey's side.

"You are better?" he enquired politely.

"Yes, I am," was the somewhat brusque rejoinder. "Where the mischief am I, and who are you?"

The newcomer's manner stiffened. He was a person of dignified carriage, and his tone conveyed some measure of rebuke.

"You are within half a mile of the Iriwarri River, if you know where that is," he replied,—"about seventy-two miles southeast of the Darawaga Settlement."

"The devil! Then I am in German East Africa?"

"And you are German?"

"I have that honour."

"Awfully sorry to have intruded," he said. "I left Marlinstein two and a half months ago, with twenty boys and plenty of stores. We were doing a big trek after lions. I took some new Askaris in and they made trouble,—looted the stores one night and there was the devil to pay. I was obliged to shoot one or two, and the rest deserted. They took my compass, damn them, and I'm nearly a hundred miles out of my bearings. You couldn't give me a drink, could you?"

"With pleasure, if the doctor approves," was the courteous answer. "Here, Jan!"

The boy sprang up, listened to a word or two of brief command in his own language, and disappeared through the hanging grass which led into another hut. The two men exchanged glances of rather more than ordinary interest. Then Dominey laughed.

"I know what you're thinking," he said. "It gave me quite a start when you came in. We're devilishly alike, aren't we?"

"There is a very strong likeness between us," the other admitted.

Dominey leaned his head upon his hand and studied his host. The likeness was clear enough, although the advantage was all in favour of the man who stood by the side of the camp bedstead with folded arms. Everard Dominey, for the first twenty-six years of his life, had lived as an ordinary young Englishman of his position,—Eton, Oxford, a few years in the Army, a few years about town, during which he had succeeded in making a still more hopeless muddle of his already encumbered estates: a few months of tragedy, and then a blank. Afterwards ten years—at first in the cities, then in the dark places of Africa—years of which no man knew anything....