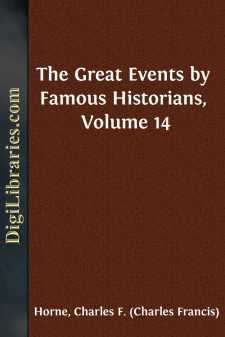 "After us, the deluge!" said Louis XV of France. He died in 1774, and the remaining quarter of the eighteenth century witnessed social changes the most radical, the most widespread which had convulsed civilization since the fall of Rome. "As soon as our peasants seek education," said Catharine II of Russia to one of her ministers, "neither you nor I will retain our places." Catharine, one of the shrewdest women of her day, judged her own people by the more advanced civilization of Western Europe. She saw that it was the growth of ideas, the intellectual advance, which had made Revolution, world-wide Revolution, inevitable.

If we look back to the beginnings of Teutonic Europe, we see that the social system existing among the wild tribes that overthrew Rome, was purely republican. Each man was equal to every other; and they merely conferred upon their sturdiest warrior a temporary authority to lead them in battle. When these Franks (the word itself means freemen) found themselves masters of the imperial, slave-holding world of Rome, the two opposing systems coalesced in vague confusing whirl, from which emerged naturally enough the "feudal system," the rule of a warrior aristocracy. Gradually a few members of this nobility rose above the rest, became centres of authority, kings, ruling over the States of modern Europe. The lesser nobles lost their importance. The kings became absolute in power and began to regard themselves as special beings, divinely appointed to rule over their own country, and to snatch as much of their neighbors' as they could.

Secure in their undisputed rank, the monarchs tolerated or even encouraged the intellectual advance of their subjects, until those subjects saw the selfishness of their masters, saw the folly of submission and the ease of revolt, saw the world-old truth of man's equality, to which tyranny and misery had so long blinded them.

Of course these ideas still hung nebulous in the air in the year 1775, and Europe at first scarce noted that Britain was having trouble with her distant colonies. Yet to America belongs the honor of having first maintained against force the new or rather the old and now re-arisen principles. England, it is true, had repudiated her Stuart kings still earlier; but she had replaced their rule by that of a narrow aristocracy, and now George III, the German king of the third generation whom she had placed as a figure-head upon her throne, was beginning, apparently with much success, to reassert the royal power. George III was quite as much a tyrant to England as he was to America, and Britons have long since recognized that America was fighting their battle for independence as well as her own.

The English Parliament was not in those days a truly representative body. The appointment of a large proportion of its members rested with a few great lords; other members were elected by boards of aldermen and similar small bodies. The large majority of Englishmen had no votes at all, though the plea was advanced that they were "virtually represented," that is, they were able to argue with and influence their more fortunate brethren, and all would probably be actuated by similar sentiments. This plea of "virtual representation" was now extended to America, where its absurdity as applied to a people three thousand miles away and engaged in constant protest against the course of the English Government, became at once manifest, and the cry against "Taxation without representation" became the motto of the Revolution.

Parliament, finding the Americans most unexpectedly resolute against submitting to taxation, would have drawn back from the dispute; but King George insisted on its continuance....