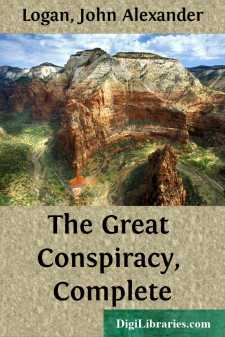 To properly understand the condition of things preceding the great war of the Rebellion, and the causes underlying that condition and the war itself, we must glance backward through the history of the Country to, and even beyond, that memorable 30th of November, 1782, when the Independence of the United States of America was at last conceded by Great Britain. At that time the population of the United States was about 2,500,000 free whites and some 500,000 black slaves. We had gained our Independence of the Mother Country, but she had left fastened upon us the curse of Slavery. Indeed African Slavery had already in 1620 been implanted on the soil of Virginia before Plymouth Rock was pressed by the feet of the Pilgrim Fathers, and had spread, prior to the Revolution, with greater or less rapidity, according to the surrounding adaptations of soil, production and climate, to every one of the thirteen Colonies.

But while it had thus spread more or less throughout all the original Colonies, and was, as it were, recognized and acquiesced in by all, as an existing and established institution, yet there were many, both in the South and North, who looked upon it as an evil—an inherited evil—and were anxious to prevent the increase of that evil. Hence it was that even as far back as 1699, a controversy sprang up between the Colonies and the Home Government, upon the African Slavery question—a controversy continuing with more or less vehemence down to the Declaration of Independence itself.

It was this conviction that it was not alone an evil but a dangerous evil, that induced Jefferson to embody in his original draft of that Declaration a clause strongly condemnatory of the African Slave Trade—a clause afterward omitted from it solely, he tells us, "in complaisance to South Carolina and Georgia, who had never* attempted to restrain the importation of slaves, and who, on the contrary, still wished to continue it," as well as in deference to the sensitiveness of Northern people, who, though having few slaves themselves, "had been pretty considerable carriers of them to others" a clause of the great indictment of King George III., which, since it was not omitted for any other reason than that just given, shows pretty conclusively that where the fathers in that Declaration affirmed that "all men are created equal," they included in the term "men," black as well as white, bond as well as free; for the clause ran thus: "Determined to keep open a market where MEN should be bought and sold, he has prostituted his negative for suppressing every Legislative attempt to prohibit or to restrain this execrable commerce. And that this assemblage of horrors might want no fact of distinguished dye, he is now exciting those very people to rise in arms among us, and purchase that liberty of which he has deprived them, by murdering the people on whom he also obtruded them; thus paying of former crimes committed against the LIBERTIES of our people with crimes which he urges them to commit against the LIVES of another."

[Prior to 1752, when Georgia surrendered her charter and became a Royal Colony, the holding of slaves within its limits was expressly prohibited by law; and the Darien (Ga.) resolutions of 1775 declared not only a "disapprobation and abhorrence of the unnatural practice of Slavery in America" as "a practice founded in injustice and cruelty, and highly dangerous to our Liberties (as well as lives) but a determination to use our utmost efforts for the manumission of our slaves in this colony upon the most safe and equitable footing for the masters and themselves."]

During the war of the Revolution following the Declaration of Independence, the half a million of slaves, nearly all of them in the Southern States, were found to be not only a source of weakness, but, through the incitements of British emissaries, a standing menace of peril to the Slaveholders....