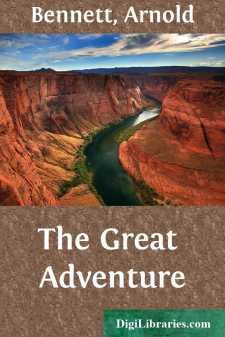 Front room on ground floor at 126 Redcliffe Gardens. An apartment furnished richly but in an old-fashioned way. Fine pictures. Large furniture. Sofa near centre. General air of neglect and dustiness. Carpet half-laid. Trunks and bags lying about in corners, some opened. Men's wearing apparel exposed. Mantelpiece, R., in disorder. At back double doors (ajar) leading to another room. Door, L., leading to hall and front door.

Albert Shawn is reclining on the sofa, fully dressed, but obviously ill: an overcoat has been drawn over his legs. A conspicuous object is a magnificent light purple dressing-gown thrown across a chair.

Door bangs off. Enter Ilam Carve in his shirt sleeves, hurriedly. Shawn feebly tries to get up.

Carve. Now, don't move. Remember you're a sick man, and forget you're a servant.

(Shawn shivers. Carve, about to put on his dressing-gown, changes his mind, and wraps it round Shawn as well as he can. Carve then puts on an oldish coat.)

Carve. I found a red lamp only three doors off. He'll be along in half a minute.

Shawn. Did you explain what it was, sir?

Shawn. (Trying to smile.) What did you say, sir?

Carve. I said (articulating with clearness) a hundred and twenty-six—and ran off. Then he yelled out after me that he'd come instantly.... I say, Shawn, we're discovered. I could tell that from his sudden change of tone. I bet the entire street knows that the celebrated Me has arrived at last. I feel like a criminal already, dashed if I don't! I wish [13]we'd gone to a hotel now. (Walks about.) I say, did you make up the bed?

Shawn. I was just doing it, sir.

Carve. But what about sheets and so on?

Shawn. I bought some this morning, ready hemmed, sir—with those and the travelling rug——

Carve. Well, don't you think you could work your passage out to the bed? With my help?

Shawn. Me in your bed, sir!

Carve. (Genially bullying.) Keep on in that tone—and I'll give you the sack on the spot. Now then. Try—before the doctor comes. (Bell rings.)

Shawn. The bell, sir—excuse me.

(Shawn coughs and puts a handkerchief to his mouth. Carve returns immediately with Dr. Pascoe.)

Pascoe. (Glancing round quickly.) This the patient? (Goes to Shawn, and looks at him. Then, taking a clinical thermometer from his pocket and wiping it; with marked respect.) Allow me to put this under your tongue for half a minute. (Having done so, he takes Shawn's wrist and, looking at his watch, counts the patient's pulse. Then turning to [14]Carve, in a low curt voiced) When did this begin?

Carve. Just now. That is, he only began to complain about six o'clock. We arrived in London this morning from Madrid....