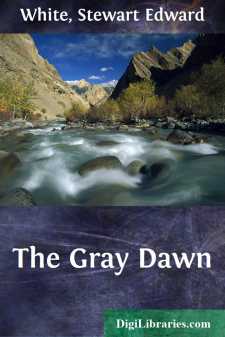 On the veranda of the Bella Union Hotel, San Francisco, a man sat enjoying his morning pipe. The Bella Union overlooked the Plaza of that day, a dusty, unkempt, open space, later to be swept and graded and dignified into Portsmouth Square. The man was at the younger fringe of middle life. He was dressed neatly and carefully in the fashionable costume of the time, which was the year of grace 1852. As to countenance, he was square and solid; as to physique, he was the same; as to expression, he inclined toward the quietly humorous; in general he would strike the observer as deliberately, philosophically competent. A large pair of steelbound spectacles sat halfway down his nose. Sometimes he read his paper through their lenses; and sometimes, forgetting, he read over the tops of their bows. The newspaper he held was an extraordinary document. It consisted of four large pages. The outside page was filled solidly with short eight or ten line advertisements; the second page grudgingly vouchsafed a single column of news items; the third page warmed to a column of editorial and another of news; all the rest of the space on these and the entire fourth page was again crowded close with the short advertisements. They told of the arrival of ships, the consignment of goods, the movements of real estate, the sales of stock, but mainly of auctions. The man paid little attention to the scanty news, and none at all to the editorials. His name was John Sherwood, and he was a powerful and respected public gambler.

The approach across the Plaza of a group of men caused him to lay aside his paper, and with it his spectacles. The doffing of the latter strangely changed his whole expression. The philosophical middle-aged quietude fell from him. He became younger, keener, more alert. It was as though he had removed a disguise.

The group approaching were all young men, and all dressed in the height of fashion. At that rather picturesque time this implied the flat-brimmed beaver hat; the long swallowtail, or skirted coat; the tight "pantaloons"; varicoloured, splendid, low-cut waistcoats of satin, of velvet, or of brocade; high wing collars; varnished boots; many sparkling, studs and cravat pins; rather longish hair; and whiskers cut close to the cheek or curling luxuriantly under the chin. They were prosperous, well-fed, arrogant-looking youths, carrying their crests high, the light of questing recklessness in their eyes, ready to laugh, drink, or fight with anybody. At sight of Sherwood they waved friendly hands, and canes, and veered in his direction.

"Yo're just the man we are looking for!" cried a tall, dark, graceful young fellow, "We are all 'specially needful of wisdom. The drinks are on some one, and we cain't decide who."

John Sherwood, his keen eyes twinkling, set his chair down on four legs.

Cal waved a graceful hand at a stout, burly, red-faced man whose thick blunt fingers, square blue jowl, and tilted cigar gave the flavour of the professional politician. "John Webb, here-excuse me, Sheriff John Webb- presumin' on the fact that he has been to the mines, and that he came here in '49, arrogates to himself the exclusive lyin' privileges, of this assemblage."

But Sheriff Webb, who had been chuckling cavernously inside his bulky frame, spoke up in a harsh and husky voice: "I told them an innocent experience of mine, and they try to hold me up for drinks. I don't object to giving them a reasonable amount of drinks—what I call reasonable," he added hastily, "but I object to being held up."

"He says he used to cook," put in a small, alert, nervous, rather flashily dressed individual named Rowlee, editor of the Bugle.

"I did!" stoutly asseverated Webb.

"And that he baked a loaf of bread so hard nobody could eat it."

"And that nobody could break it," Rowlee went on.

"I have no difficulty in believing that," said Sherwood judicially. "Your case is mighty weak yet, Cal."

"But he claims it was so hard that they used it for a grindstone."

"I did not!" disclaimed Webb indignantly.

An accusing groan met this statement.

"I tell you I didn't say anything of the kind," roared Webb, his bull voice overtopping them all.

"Well, what did you say, then?" challenged Calhoun Bennett.

"I said we tried to use her as a grindstone," said Webb, "but it didn't work."