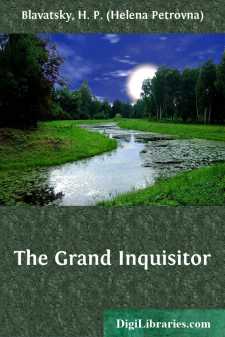 "Quite impossible, as you see, to start without an introduction," laughed Ivan. "Well, then, I mean to place the event described in the poem in the sixteenth century, an age—as you must have been told at school—when it was the great fashion among poets to make the denizens and powers of higher worlds descend on earth and mix freely with mortals... In France all the notaries' clerks, and the monks in the cloisters as well, used to give grand performances, dramatic plays in which long scenes were enacted by the Madonna, the angels, the saints, Christ, and even by God Himself. In those days, everything was very artless and primitive. An instance of it may be found in Victor Hugo's drama, Notre Dame de Paris, where, at the Municipal Hall, a play called Le Bon Jugement de la Tres-sainte et Gracièuse Vierge Marie, is enacted in honour of Louis XI, in which the Virgin appears personally to pronounce her 'good judgment.' In Moscow, during the prepetrean period, performances of nearly the same character, chosen especially from the Old Testament, were also in great favour. Apart from such plays, the world was overflooded with mystical writings, 'verses'—the heroes of which were always selected from the ranks of angels, saints and other heavenly citizens answering to the devotional purposes of the age. The recluses of our monasteries, like the Roman Catholic monks, passed their time in translating, copying, and even producing original compositions upon such subjects, and that, remember, during the Tarter period!... In this connection, I am reminded of a poem compiled in a convent—a translation from the Greek, of course—called, 'The Travels of the Mother of God among the Damned,' with fitting illustrations and a boldness of conception inferior nowise to that of Dante. The 'Mother of God' visits hell, in company with the archangel Michael as her cicerone to guide her through the legions of the 'damned.' She sees them all, and is witness to their multifarious tortures. Among the many other exceedingly remarkably varieties of torments—every category of sinners having its own—there is one especially worthy of notice, namely a class of the 'damned' sentenced to gradually sink in a burning lake of brimstone and fire. Those whose sins cause them to sink so low that they no longer can rise to the surface are for ever forgotten by God, i.e., they fade out from the omniscient memory, says the poem—an expression, by the way, of an extraordinary profundity of thought, when closely analysed. The Virgin is terribly shocked, and falling down upon her knees in tears before the throne of God, begs that all she has seen in hell—all, all without exception, should have their sentences remitted to them. Her dialogue with God is colossally interesting. She supplicates, she will not leave Him. And when God, pointing to the pierced hands and feet of her Son, cries, 'How can I forgive His executioners?' She then commands that all the saints, martyrs, angels and archangels, should prostrate themselves with her before the Immutable and Changeless One and implore Him to change His wrath into mercy and—forgive them all. The poem closes upon her obtaining from God a compromise, a kind of yearly respite of tortures between Good Friday and Trinity, a chorus of the 'damned' singing loud praises to God from their 'bottomless pit,' thanking and telling Him:

"My poem is of the same character.

"In it, it is Christ who appears on the scene. True, He says nothing, but only appears and passes out of sight. Fifteen centuries have elapsed since He left the world with the distinct promise to return 'with power and great glory'; fifteen long centuries since His prophet cried, 'Prepare ye the way of the Lord!' since He Himself had foretold, while yet on earth, 'Of that day and hour knoweth no man, no, not the angels of heaven but my Father only.' But Christendom expects Him still. ...

"It waits for Him with the same old faith and the same emotion; aye, with a far greater faith, for fifteen centuries have rolled away since the last sign from heaven was sent to man,

And blind faith remained aloneTo lull the trusting heart,As heav'n would send a sign no more.

"True, again, we have all heard of miracles being wrought ever since the 'age of miracles' passed away to return no more. We had, and still have, our saints credited with performing the most miraculous cures; and, if we can believe their biographers, there have been those among them who have been personally visited by the Queen of Heaven. But Satan sleepeth not, and the first germs of doubt, and ever-increasing unbelief in such wonders, already had begun to sprout in Christendom as early as the sixteenth century. It was just at that time that a new and terrible heresy first made its appearance in the north of Germany.* [*Luther's reform] A great star 'shining as it were a lamp... fell upon the fountains waters'... and 'they were made bitter.' This 'heresy' blasphemously denied 'miracles.' But those who had remained faithful believed all the more ardently, the tears of mankind ascended to Him as heretofore, and the Christian world was expecting Him as confidently as ever; they loved Him and hoped in Him, thirsted and hungered to suffer and die for Him just as many of them had done before.... So many centuries had weak, trusting humanity implored Him, crying with ardent faith and fervour: 'How long, O Lord, holy and true, dost Thou not come!' So many long centuries hath it vainly appealed to Him, that at last, in His inexhaustible compassion, He consenteth to answer the prayer.... He decideth that once more, if it were but for one short hour, the people—His long-suffering, tortured, fatally sinful, his loving and child-like, trusting people—shall behold Him again. The scene of action is placed by me in Spain, at Seville, during that terrible period of the Inquisition, when, for the greater glory of God, stakes were flaming all over the country.

"This particular visit has, of course, nothing to do with the promised Advent, when, according to the programme, 'after the tribulation of those days,' He will appear 'coming in the clouds of heaven.' For, that 'coming of the Son of Man,' as we are informed, will take place as suddenly 'as the lightning cometh out of the east and shineth even unto the west.' No; this once, He desired to come unknown, and appear among His children, just when the bones of the heretics, sentenced to be burnt alive, had commenced crackling at the flaming stakes....