The Grand Canon of the Colorado 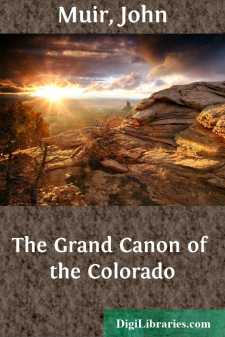 Happy nowadays is the tourist, with earth's wonders, new and old, spread invitingly open before him, and a host of able workers as his slaves making everything easy, padding plush about him, grading roads for him, boring tunnels, moving hills out of his way, eager, like the devil, to show him all the kingdoms of the world and their glory and foolishness, spiritualizing travel for him with lightning and steam, abolishing space and time and almost everything else. Little children and tender, pulpy people, as well as storm-seasoned explorers, may now go almost everywhere in smooth comfort, cross oceans and deserts scarce accessible to fishes and birds, and, dragged by steel horses, go up high mountains, riding gloriously beneath starry showers of sparks, ascending like Elijah in a whirlwind and chariot of fire.

First of the wonders of the great West to be brought within reach of the tourist were the Yosemite and the Big Trees, on the completion of the first transcontinental railway; next came the Yellowstone and icy Alaska, by the Northern roads; and last the Grand Cañon of the Colorado, which, naturally the hardest to reach, has now become, by a branch of the Santa Fé, the most accessible of all.

Of course with this wonderful extension of steel ways through our wilderness there is loss as well as gain. Nearly all railroads are bordered by belts of desolation. The finest wilderness perishes as if stricken with pestilence. Bird and beast people, if not the dryads, are frightened from the groves. Too often the groves also vanish, leaving nothing but ashes. Fortunately, nature has a few big places beyond man's power to spoil—the ocean, the two icy ends of the globe, and the Grand Cañon.

When I first heard of the Santa Fé trains running to the edge of the Grand Cañon of Arizona, I was troubled with thoughts of the disenchantment likely to follow. But last winter, when I saw those trains crawling along through the pines of the Cocanini Forest and close up to the brink of the chasm at Bright Angel, I was glad to discover that in the presence of such stupendous scenery they are nothing. The locomotives and trains are mere beetles and caterpillars, and the noise they make is as little disturbing as the hooting of an owl in the lonely woods.

In a dry, hot, monotonous forested plateau, seemingly boundless, you come suddenly and without warning upon the abrupt edge of a gigantic sunken landscape of the wildest, most multitudinous features, and those features, sharp and angular, are made out of flat beds of limestone and sandstone forming a spiry, jagged, gloriously colored mountain-range countersunk in a level gray plain. It is a hard job to sketch it even in scrawniest outline; and try as I may, not in the least sparing myself, I cannot tell the hundredth part of the wonders of its features—the side-cañons, gorges, alcoves, cloisters, and amphitheaters of vast sweep and depth, carved in its magnificent walls; the throng of great architectural rocks it contains resembling castles, cathedrals, temples, and palaces, towered and spired and painted, some of them nearly a mile high, yet beneath one's feet. All this, however, is less difficult than to give any idea of the impression of wild, primeval beauty and power one receives in merely gazing from its brink. The view down the gulf of color and over the rim of its wonderful wall, more than any other view I know, leads us to think of our earth as a star with stars swimming in light, every radiant spire pointing the way to the heavens.

But it is impossible to conceive what the cañon is, or what impression it makes, from descriptions or pictures, however good. Naturally it is untellable even to those who have seen something perhaps a little like it on a small scale in this same plateau region. One's most extravagant expectations are indefinitely surpassed, though one expect much from what is said of it as "the biggest chasm on earth"—"so big is it that all other big things,—Yosemite, the Yellowstone, the Pyramids, Chicago,—all would be lost if tumbled into it." Naturally enough, illustrations as to size are sought for among other cañons like or unlike it, with the common result of worse confounding confusion....