The Governments of Europe 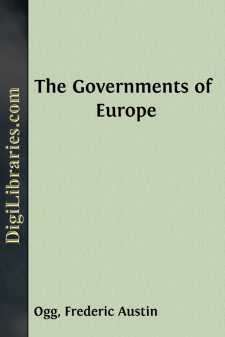 It is a matter of common observation that during the opening years of the twentieth century there has been, in many portions of the civilized world, a substantial quickening of interest in the principles and problems of human government. The United States is happily among those countries in which the phenomenon can be observed, and we have witnessed in recent times not only the organization of societies and the establishment of journals designed to foster research within the field, but also a notable multiplication and strengthening of courses in political science open to students in our colleges and universities, as well as the development of clubs, forums, extension courses, and other facilities for the increasing of political information and the stimulation of political thinking on the part of the people at large. It is the object of this book to promote the intelligent study of government by supplying working descriptions of the governmental systems of the various countries of western and central Europe as they have taken form and as they operate at the present day. Conceived and prepared primarily as a text for use in college courses, it is hoped none the less that the volume may prove of service to persons everywhere whose interest in the subject leads them to seek the sort of information which is here presented.

The content of the book has been determined, in the main, by three considerations. In the first place, it has been deemed desirable to afford a wide opportunity for the comparative study of political institutions, especially by reason of the familiar fact that the governmental system of a minor country may, and frequently does, exhibit elements of novelty and of importance not inferior to those to be observed in the political organization of a greater state. Hence there are included descriptions of the governments of the minor as well as of the major nations of western and central Europe; and the original purpose to attempt some treatment of the governments of the eastern nations has been abandoned, somewhat reluctantly, only because of the demands of space, and because it was felt that this portion of the projected work would perhaps meet no very serious need in the usual college courses. In the second place, it is believed that the intelligent study of present-day governments must involve at all stages the taking into careful account of the historical origins and growth of these governments. Hence a considerable amount of space has been devoted to sketches of constitutional history, which, however, are in all instances so arranged that they may readily be omitted if their omission is deemed desirable. In the case of countries whose political system underwent a general reconstitution during the Revolutionary and Napoleonic era it has been thought not feasible to allude, even briefly, to historical developments prior to the later eighteenth century. In the third place, it has been considered desirable to include in the book some treatment of political parties and of the institutions of local administration....