The Good Shepherd A Life of Christ for Children 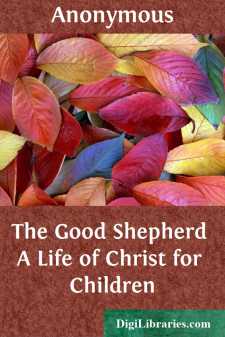 CHAPTER I WHY JESUS CAME TO THIS WORLD

In the beginning, before the world was made, the Lord Jesus lived in heaven. He lived in that happy place with God. Then God made the world. He told the hills to come up out of the earth, and the seas to run down into the deep places which He had made for them. He made the grass, the trees, and all the pretty flowers. He put the sun, the moon, and the stars in the sky. He filled the water with swimming fish, the air with flying birds, and the dry land with walking and creeping animals. And then He said, 'Let Us make man.' Who were meant by 'Us'? Who was with God when He made the world? It was Jesus. The Bible says:

'THE WORD (that means Jesus) WAS WITH GOD, AND THE WORD WAS GOD. THE SAME WAS IN THE BEGINNING WITH GOD. ALL THINGS WERE MADE BY HIM.'

So after He had made everything else, God made a man, and named him Adam. God put Adam into the beautiful Garden of Eden, and at first he was good and very happy. God also made a woman, named Eve, to be his wife, and to help him to take care of the garden. All the fruit in the garden, except what grew on one tree, was given to Adam and Eve to eat; all the animals were their servants; and God was their Friend.

A wicked angel, who had been turned out of heaven, saw how happy Adam and Eve were, and he was angry, and thought, 'I will make them as bad and unhappy as I am; I will make them do what God has told them not to do. Then he will turn them out of Eden, and they and their children will be my servants for ever, and I shall be king of the world.'

So the wicked angel, whose name was Satan, came into Eden. He got Adam and Eve to take the fruit which God had told them not to eat, and God had to send them out of the beautiful garden; for God had said He would punish Adam and Eve if they took that fruit, and God always keeps His word.

But God went on loving Adam and Eve even when He knew that He must punish them, and He tried to make them good in this way. He thought, 'I will send My dear Son down to the earth. He shall become a little child, and grow up to be a man, and shall die for the sins of the world.'

Hundreds and hundreds of years passed away before Jesus came. But a great many of the people who lived in Palestine were expecting Him. God had said that when Jesus came, He would be a Jew. The Jews were very proud about that. They often talked about the coming of Jesus. When they talked about Him, they called Him the Messiah.

Just before Jesus was born, the Jews were very unhappy. Roman soldiers had been fighting with them, and had conquered them, and made them servants of the great Roman king. He was called Augustus Caesar, and he gave the Jews another king called Herod. He was very wicked.

[Illustration: Map of Palestine at the time of Christ.]

The Jews longed to get rid of Herod, and many of them thought, 'It will be all right when the Messiah comes. The Messiah will fight against the Romans; He will drive them away from our land; and then He will be our King instead of that wicked Herod.' But only a few Jews remembered that Jesus was coming to fight against Satan and against sin....