The Golden Sayings of Epictetus 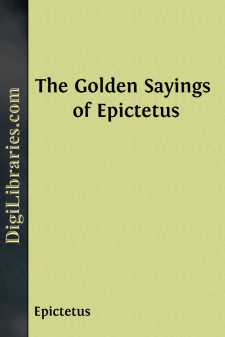 Are these the only works of Providence within us? What words suffice to praise or set them forth? Had we but understanding, should we ever cease hymning and blessing the Divine Power, both openly and in secret, and telling of His gracious gifts? Whether digging or ploughing or eating, should we not sing the hymn to God:—

Thus should we ever have sung; yea and this, the grandest and divinest hymn of all:—

Great is God, for that He hath given us a mind to apprehend these things, and duly to use them!

What then! seeing that most of you are blinded, should there not be some one to fill this place, and sing the hymn to God on behalf of all men? What else can I that am old and lame do but sing to God? Were I a nightingale, I should do after the manner of a nightingale. Were I a swan, I should do after the manner of a swan. But now, since I am a reasonable being, I must sing to God: that is my work: I do it, nor will I desert this my post, as long as it is granted me to hold it; and upon you too I call to join in this self-same hymn.

How then do men act? As though one returning to his country who had sojourned for the night in a fair inn, should be so captivated thereby as to take up his abode there.

"Friend, thou hast forgotten thine intention! This was not thy destination, but only lay on the way thither."

"And how many more of the sort there may be; only to pass through upon thy way! Thy purpose was to return to thy country; to relieve thy kinsmen's fears for thee; thyself to discharge the duties of a citizen; to marry a wife, to beget offspring, and to fill the appointed round of office. Thou didst not come to choose out what places are most pleasant; but rather to return to that wherein thou wast born and where wert appointed to ba a citizen."

III Try to enjoy the great festival of life with other men. IV

But I have one whom I must please, to whom I must be subject, whom I must obey:—God, and those who come next to Him. He hath entrusted me with myself: He hath made my will subject to myself alone and given me rules for the right use thereof.

Rufus used to say, If you have leisure to praise me, what I say is naught. In truth he spoke in such wise, that each of us who sat there, though that some one had accused him to Rufus:—so surely did he lay his finger on the very deeds we did: so surely display the faults of each before his very eyes.

But what saith God?—"Had it been possible, Epictetus, I would have made both that body of thine and thy possessions free and unimpeded, but as it is, be not deceived:—it is not thine own; it is but finely tempered clay. Since then this I could not do, I have given thee a portion of Myself, in the power of desiring and declining and of pursuing and avoiding, and is a word the power of dealing with the things of sense....